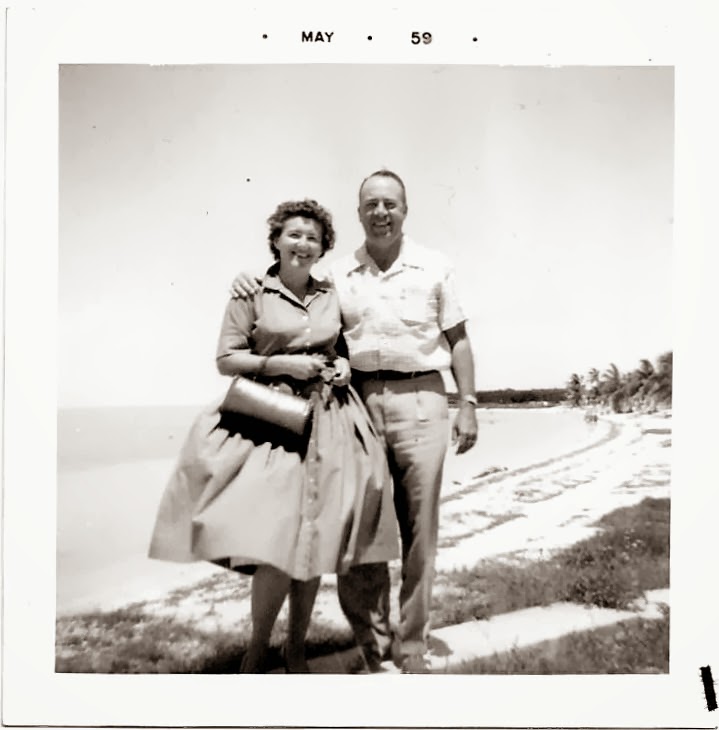 This is the sixth post from Barbara, my mother-in-law, who comes from a family of six children who all grew up to walk in Truth, something that is very rare today ~

My parents were newly saved at the outset of their marriage.  My dad's upbringing was Christian, to the point where he accepted Christ at about age 13, but wandered far away until his early 20's.  My mom's home was not Christian.    Dad was brought back to the Lord through coming across an old Bible of his, where he wrote that at age 13 he "gave his heart to God."  I guess my mom followed right along, which she was good at.

All through their marriage, as far as I could tell, she helped him become the great dad he was by being wonderfully, biblically submitted to him.  I never once heard her argue with him, or say anything cross to him.  Only once in all my years of knowing them did I ever hear Mom say anything remotely negative about Dad, and that was to murmur a complaint one day about how he whistled for her to come and she had to stop what she was doing and come see what he needed her for.

But she always came when bidden.  And she modeled it in practical ways, such as the music played in our home.  She loved classical, but Dad didn't; so we hardly heard it played in our home.  I never heard her complain, and only found out about it years later; and her quiet model of submission strongly impacted me.

My dad was a romantic, as I later found out after my mom died and my dad sought to remarry {He did so within a year, a good sign of a good first marriage}.  I remember Daddy walking through the kitchen and patting Mom's behind; I guess he knew that sex begins in the kitchen!  In any case, they had their share of the marriage bed with six children {and one miscarriage}.  When Daddy found a second wife, I watched him romance her, and figured that's what he'd done with Mom.  It was sweet to watch, and I got to appreciate a side of Dad I hadn't really seen.

Daddy always made sure we thanked Mom for the meals and helped out with the dishes.  Later on, he bought her a dishwasher when they became available and affordable.  In looking back, I think he wanted to make her life rearing six kids to be as easy as possible.  I have the sense throughout my childhood that Daddy made sure we held Mom in the greatest of respect; we were never allowed to speak back to her, or to him, for that matter.

He always made sure we lived in the best home his meager income could afford: twice we lived on a lake {in Florida}, and other times not far from the beach {He loved the water, being a former lifeguard}.  I think now that it must have pleased Mom to live in a new house three times while raising children.

In one of those new houses, in muggy Miami, Florida, my parents' bedroom was the only room in the house that had an air conditioner.  As a kid it didn't phase me; but now as a married adult, I can see why they did it, for more than reasons than to just combat the warmth and humidity of the Florida air!

In retrospect, after being married myself for 34 years, I can see that my parents wanted to please each other, and set aside special times for each other.  They loved ice cream, especially the Dairy Queen kind.  Every now and then one of them would sneak out to the DQ and bring back their treats to eat after the kids had gone to bed. {But we kids could tell by the paper cups in the garbage the next day!}  I would guess that underneath it all we kids knew this was a good thing for them to do.  They also went to the local university football home games with other adults from church.

Let thy fountain be blessed:
and rejoice with the wife of thy youth.
Proverbs 5:18