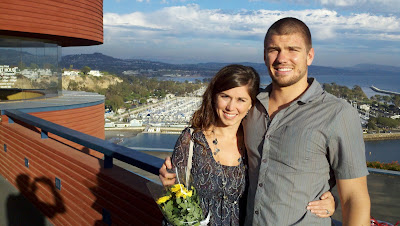 Alyssa has adapted to Jon ~
She likes to go to bed late.  He likes to go to bed early since he wakes up early to go to work.  She goes to bed early now.  Sure, she'll read in bed or play with her iPhone, but she is in bed with him.
She could care less about football.  They have been coming down on Sundays to walk the beach with us, go to Kis for breakfast, and watch football.  {Alyssa cleans out her old room, reads, or plays with her iPhone while we watch football.}  Steven told Jon he could get football off of the computer, because they don't have cable.  Jon looked at Alyssa and said, "Babes, we can watch football at home now."  She enthusiastically responded, "Great!"
She loves a simple big salad for dinner.  Jon likes ribs and steaks.  She eats ribs and steak for dinner now.  {He does eat a big salad for lunch. ;)}
She loves being in shape so she takes these exercise classes that have really helped strengthen her back and neck.  They are expensive.  I asked her if she takes them often.  She told me only if Jon says she can take them.  He said, "Which is whenever she wants to take them."
For their anniversary, they went on a long hike up in the mountains.  It was a very hot day and very tiring.  He loves to hike.  She loves to hike now also!
We were having a family party a few weeks ago and I asked her to come down.  She said Jon didn't want her to because he wanted her with him.  He works hard all day and loves to have her home at night with him.  She loves being home with him.
She has adapted her life to his.  They are both very happy.  They love pleasing each other.
I know a lot of women aren't going to like the following verse, but it is good, so good!  Look at it this way, men NEED women!
Neither was the man created for the woman; but the woman for the man.
I Corinthians 11:9