Have Them Early And Often 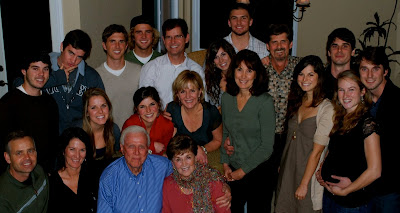 This is the advice Ken gives to our married children concerning having children.  I was pondering this when a woman wrote a post about her honeymoon baby in response to my post on Ryan and Erin's honeymoon baby.

In her post she said how happy she was that she had children early, because she became unable to have children in her 30's, I think because of illness.  This is exactly what happened to me!

I had four children in five and one half years.  Cassi, my baby, was born when I was only 30 years old.  I became very ill after that for 20 years.  We wanted more children, even four more, but I was too sick.  I remember thinking how blessed I was to have the four children I had since I couldn't have anymore.

I think women today take their fertility and having babies for granted.  They think they can have them any time they want and when they want.  Usually, they pursue a career, travel, etc. before settling down and getting married.  Then they discover they can't get pregnant.

Now if you are doing it in God's timing...waiting for the husband God has chosen and still are unable to conceive, you just have to trust God knowing that He is in control and works out everything for good to those who love Him and are called according to His purpose.  {The key being "love Him and called according to His purpose"...meaning He is Lord of your life and you walk in obedience to Him}.

When we do things our way, they usually don't turn out so good.  God's ways are good.  He knows what He is doing.

One woman I know got married young and didn't believe in birth control.  Her husband had a rare disease which causes tumors all over his body and they usually die young.  They had five precious children right in a row.  The father died at 27 years old.  Were they irresponsible?

Even though the father had that disease,  he had a wonderful wife and enjoyed every moment he had with his children. His short life was rich and full.  God will take care of his wife.  He promises to take care of widows and orphans, mostly through His people.

I know the mother is so happy she had the children God blessed her with.  They bring much joy into her life.  God smiles upon pregnancy and babies.  He is our provider.  He knit us in our mother's womb.  Celebrate life!  Celebrate God who is the giver of every precious life!

Happy is the man that has his quiver full of them: they shall not be ashamed.
Psalm 127:5

P.S.  The picture above is of my whole family celebrating my mom's 80 birthday!  Baby Emma is in Erin's tummy. :)