What If He Died? 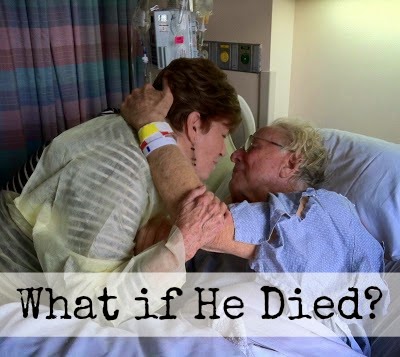 What if you knew that your husband was going to die tomorrow?

On my post Be His Girlfriend!, several made some very interesting comments. One said that she knew a woman who was always complaining about her husband. When he died, she talked about him as if he were a saint. It was like she was talking about two different men.

Another woman said she was married to a man and wish she would have acted like a girlfriend to him when he was alive. He died two years ago, she regrets being the way she was with him. Wow, regrets.

Don't live with regrets. Think what your marriage would be like if you lived as if your husband was going to die tomorrow ~

You would never say anything negative about him.


You would appreciate all the good things about him.


You would want to make his life as happy as possible.


You would be affectionate and want to make him feel good!


You would tell him what a great husband he is to you...

My Dad has been in the hospital for six weeks now. He suddenly developed a fever of 104 degrees a few days ago. We thought for sure we would lose him. During that time, my sisters and I scratched his back, rubbed his feet, sang to him, cried, and quoted Scripture.

All we could think of was what a great Dad he has been to us. Sure, he wasn't perfect. He made a lot of mistakes, but when faced with death, none of those things matter. You just think about how much you are going to miss him. My Mom is broken-hearted.

You never know when your last day with your husband is going to be so why not appreciate and love him now.  Dwell on all the good things about him. Let him know. Show him. Tell him.

And be ye kind one to another, tenderhearted, forgiving one another,
even as God for Christ's sake hath forgiven you.
Ephesians 4:32

The picture above is of my Mom and Dad yesterday.