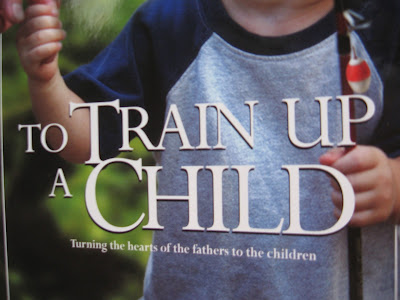 Whew!!!  When I wrote Pray For Michael Pearl, I received several long comments and emails telling me how wrong Pearl's disciplining methods are and I shouldn't be supporting them.  I deleted the comments because I don't want any Pearl bashing going on on my blog.  There are many other blogs that do that.  I only want to support them.

{It is funny.  I was just reading the comments that people sent me and they didn't send me the comments in the context that the Pearl's wrote them...Figures.  I will give them to you in the whole context.  ALWAYS make sure you check the context before you believe everything people tell you.}

However, if you are just beginning to institute training on an already rebellious child who runs from discipline, and he is too disturbed to listen {This is the part they somehow left out.}, then you must constrain him.  If you have to sit on him to spank him, then do not hesitate.  And hold him there until he has surrendered.  Prove that you are bigger, tougher, more patiently enduring, and are unmoved by his wailing.  Hold the resisting child in a helpless position for several minutes, or until he is totally surrendered.  Accept no conditions for surrender - no compromise.  Your are to rule over him as a benevolent sovereign.  Your word is final.

They are very clear that there should never be bruising of a child.   A child that is out of control, rebellious, and refuses to obey needs some stern discipline or he will be in grave danger as he gets older.

We never had to get to this point.  The first time our children had a temper tantrum or refused to obey us, around 18 months, Ken and I would take turns telling them to pick up the toys {or whatever they were refusing to do} and then give them a swat on their bottom if they wouldn't do it.  With all four of our children, it took almost four long, difficult hours.

Finally, they submitted, picked up their toys, and we cuddled with them.  We won the war.  They never had a temper tantrum after that, were mean to their siblings, and obeyed us quickly.  They knew we were boss, not them.

So I am very tired of people misinterpreting what the Pearls teach.  Parents NEED to get control of rebellious children quickly.  The earlier you stop rebellion, the easier they are to raise.  This makes it a whole lot easier on teachers, coaches, bosses, etc.

No, it is not easy but it is so worth it to have obedient, happy, and disciplined children.  My children were a joy to raise.  May you experience the same with your children!