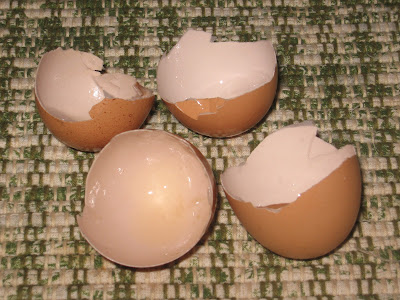 Do people have to walk on eggshells around you?  Especially your husband?  Is he afraid of doing or saying the wrong thing for fear of "hurting your feelings" or making you angry?  My friends, this should not be.

We were at a marriage conference recently and a couple was interviewed.  They said they were going to get divorced a year ago but went through a marriage seminar and are better today.  The husband admitted it was all his fault.  He just didn't understand his wife and was a bonehead.  She agreed.

He rated the marriage a seven out of ten now.  She said she couldn't yet rate it because it still goes up and down.  Ken and I watched them the rest of the day.  He was trying so hard to be kind to her.  He put his arm around her at one time and she took his arm off of him.  She is not loving him and accepting him as he is and the way she should.

I would love to mentor her.  She still doesn't get it.  She thinks she won't be happy until he is perfect.  She is blind to any fault in her marriage.  I use to be that way.  Ken would make me happy for awhile but if he spoke to me in a voice I didn't like, I would get angry at him.  It was pathetic!

I mentioned this to Cassi and she said, "Yeah, you weren't very fun to live with."  Don't make the same mistake I made with my family.  Love them just the way God made them...warts and all!

But let all those that put their trust in thee rejoice:  let them ever shout for joy, because thou defends them:  let them also that love you name be joyful in thee.
Psalms 5:11