Their Ducks Weren't All in Order 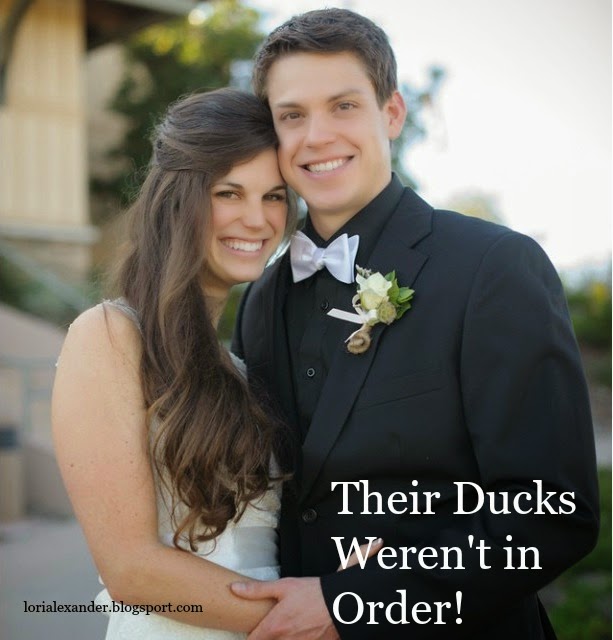 Almost from the moment Ryan met Cassi, he wanted to marry her. He was in Pharmacy school and only had two more years to go. After beginning his third year and following a pharmacist around, he decided he didn't want to be a pharmacist. He wanted to change careers and go to dental school, Lord willing. {He had become good friends with Steven and liked his career path much better.}

If he is to become a dentist, he has four years of schooling ahead of him, but he wanted to marry Cassi! He worked hard to pass the dental exam to get into dental school. He passed with flying colors. They got married. However, it was late to apply for dental school by this time but he did it anyways. He got accepted into three. One is in California that is over four times the cost of two in Texas and it is much cheaper to live in Texas. They chose Texas.

Cassi worked full-time for awhile so she got a good job. It exhausted her. She came home every night and didn't have the energy to fix meals for her new husband or the strength to do much more than come home and rest. They decide together that she must work only part-time since full-time is too much on her.  Her greatest desire is to take good care of her husband. Her employer, who has never allowed his employees to work part-time, offered her a part-time position! He values her work in his office.

Ryan applied for an interest free loan that would cover half of all of his tuition. He got it. A family from their church offered them a large room in their home with a king-sized bed, their own bathroom, and told them they have free access to their kitchen and to make themselves at home. They told them that if there was anything they do that bothers them to tell them. They got to live there for free until an apartment at the school was available. They moved into their VERY affordable apartment last week.

God ordained marriage. He values marriage WAY above an education. He values children. He wants us getting married and having children and then He promises to provide for us. He is abundantly providing for Ryan and Cassi WAY beyond what they could have ever imagined. He loves Ryan and Cassi. They love Him. He is taking good care of them.

Now unto him that is able to do exceeding abundantly
above all that we ask or think, according to the power
that worketh in us, Unto him be glory in the church
by Christ Jesus throughout all ages, world without end. Amen.
Ephesians 3:20,21