Without Men, We'd All Be Vegetarians 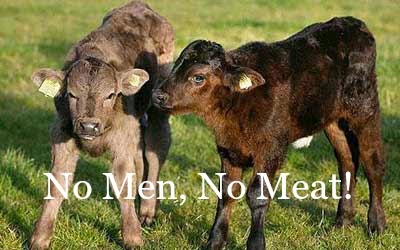 While we were in Wisconsin, I took Emma to an organic farm. There were two baby calves and we enjoyed just watching them. They were so adorable and I could tell that we would get very attached to those two calves as they grew, if we were around. As we were leaving, a big, burly guy was driving a huge truck filled with large cows, probably taking them to be slaughtered.

This got me to thinking. If there were no men in the world, we would all be vegetarians. Women have a hard time not having an emotional attachment to animals and would hate having to slaughter them. When I mentioned this to Erin {my daughter-in-law}, she told me that when her grandmother was a child during the depression, they had a victory garden and raised rabbits for food.

When it was time to slaughter them, her dad would go down the street and change rabbits with their neighbor so they wouldn't have to eat their pet rabbit. When she grew up, she found out that her dad simply went down the street, shook his neighbor's hand, then slaughtered their rabbit. They were eating their pet rabbits all that time! He knew his daughter would never be able to handle the fact that they were eating their pet.

This was just another example to me of the differences between the sexes even though our society likes to blur the lines so much that there is hardly a noticeable difference between the two. From the beginning of time, men have been the hunters and providers while women bore children and took care of the home.

The blurring of the lines between the sexes has caused havoc in our world. Men look like women and women look like men. Men are becoming feminized and homosexuality is becoming more common. Women are becoming more masculine {even fighting in wars} and no longer think they need men. Sexuality is becoming undefined, therefore, children are growing up very sexually confused. Women go off to work and men leave their families. Women have children without husbands and expect the government to take care of them. Children are growing up without fathers. Society is lost and suffering without clearly defined male and female roles.

God established these roles from the very beginning. In fact, they have always existed. God the Father was the authority and the Son submitted to the Father. God made Adam the authority and Eve was to be his help meet, submitting to his authority; clearly defined roles.

Woman's curse was ~ thy desire {to control} shall be to thy husband, and he shall rule over thee {Genesis 3:16}. God's prescription to overcome the curse is ~ Wives, submit yourselves unto your own husbands, as it is fit in the Lord. Husbands, love your wives, and be not bitter against them {Colossians 3:18,19}.

It is that simple, women. God created clearly defined roles for a reason. There is peace and harmony in the home when they are followed. Therefore, begin submitting to your husband in everything. Allow him to be the leader of the home, then go eat a piece of meat and thank the good Lord for creating men!