"I was Born This Way" 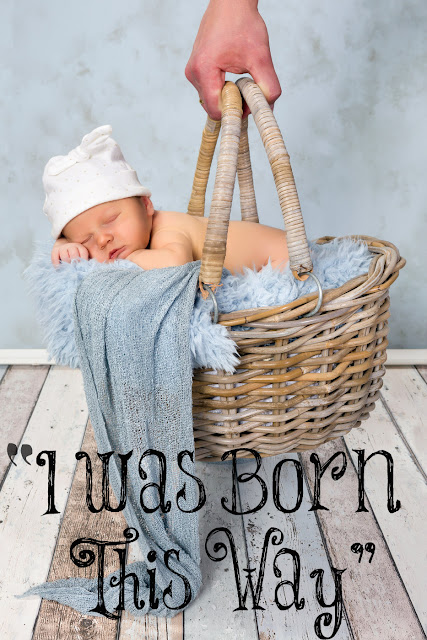 We are ALL born into a sinful world and choose to sin. In simple terms, sin is a desire to choose fleshly ways over God's ways. All parents teach their children some form of morality and what is right and what is wrong. Some are taught from a very young age that they cannot always choose what their body and mind desires or they will never achieve what they want in life or develop any relationships. The goal of the morality taught by non-Christians is often done with an eye towards helping their children lead a successful life. Success has many faces as one desires to be successful in self-discipline, in cultivating healthy and loving relationships, and in contributing to the world in a meaningful way. Success is often measured by what job you have and how wealthy you are, but success can be measured in many man-made ways. The Dali Lama might say that success is being ONE with the universe.

For Christians, morality is taught with a goal to please God. God has not only made mankind but has given us a Users Manual in the Bible that teaches us all we need for life and godliness. Our success is not measured by worldly things, but by those things that have eternal value. The flesh and fleshly desires are not evil in themselves, but when the desires of the flesh go against God's will they set us up for failure. One may think they are making themselves happy when they pursue fleshly desires outside of God's established ways, but carried away by the flesh always makes short term gain into long term pain. Too much eating leads to being trapped by an over-sized body; too much wine leads to addiction and liver disease if you can avoid murdering a child while driving drunk; too much pride or selfishness leads to a life of painful and dashed relationships; the list goes on and on. No one can escape the excesses of the flesh without being burned in this life or the next.

So what about a pedophile that is "born" attracted to having sex with children. To begin with no one is born sexually attracted to anyone else. They are babies and then children; children don't have the sexual hormones released yet to desire sex. It's impossible. Anyone who says that they know they were attracted to the same sex or children when they were a child don't understand that we are all attracted to other children when we are a child, but not in a sexual way. Boys often much prefer boys and girls girls in childhood, but not a one of them attracted sexually.

When it comes to the sexual appetites of the flesh, things can become complicated, and unclear when we go away from God's simple prescription of one man and one women. God's intent was from the beginning that each man have his own wife and outside of the marriage bed sex was off limits. The reason why this simple formula is prescribed is for a myriad of practical reasons: avert diseases, avert broken hearts and minds, create a lifelong bond, but the main reason is the creation of the family unit. God's main purpose on earth is to create a family of God, and his main way of creating this family of God is through individual families who choose to serve God and to please him.

So what happens when mankind is left to its own design for morality, especially sexual morality. With no moral compass beyond the simple rules of do what feels good, {but of course be sure not to step on the rights of others}, you get all kinds of sexual perversion. Gay sex is considered permissible because it theoretically fits the world's mores as it is performed by two consenting adults, but now, quickly piggybacking on the seemingly new found wins by gay rights activists comes this sorry fellow who attacks Christians for being judgmental because he too was "born this way."

Well, my friend, I have news for you in that I was "born" to want to have sex with multiple woman {actually, I became this way once I went through puberty}, yet I must daily choose to be sexually committed to one person all of my life. You can have gay tendencies or be attracted to children, but you can choose a better way, even if you are "born this way." God's ways are intended for the better good, and we must put aside our own fleshly desires and seek the higher plane of morality, and in so doing find the blessings that only God can give.

I feel badly for anyone who is sexually attracted to someone that is outside of God's design and they have no way of fulfilling that sexual desire apart from destruction. How they ended up with a deviant sexual desire is not as important as what they are going to do about it. If there is one thing that mankind understands intuitively, and it has been handed down generation after generation by God's Word, is human responsibility. It is totally irresponsible to have sex with a child, or any underage person as it often irreparably damages their life forever. Rampant promiscuous sex outside of marriage and gay sex may forever damage society, but God's condemnation is absolutely upon anyone who will harm a child.

The slippery slope of sexual sins has begun to gain steam and now all sins will quickly be excused by "I was born this way." Obesity, alcoholism,  addiction, homosexuality, pedophilia... is bestiality or murder the next excused illness? If people will not accept God's ways, I sure hope that society will stand strong for individual human responsibility that does not impinge on the rights of others. One's right to sin does not give them the right to drag a 15 year old, or a 6 year old into sexual sin. Be responsible enough to keep your sins away from children and give them the opportunity to choose their own way instead of being messed with by a messed up person.

Contrary to popular opinion, men and women can control their passions since they are human beings made in the image of God and NOT animals. An animal has no ability to choose apart from its natural instincts and learned behaviors, but a human can choose to go against his or her own personal desires for the good of others and for society as a whole. If our society loses its last moral pillar of taking personal responsibility for ones life and decisions, all hope will be lost.

The more one chooses to go away from Godly principles and morality, the further they will be enslaved by their sinful flesh and give in to all kinds of abominations; suffering the consequences of their own sin in their own bodies. {Read Romans 1} As for me and my house we will choose the Lord and his righteous ways, because God knows best, and he is the giver of great blessings to those who choose to love him and keep his commandments.

For this cause God gave them up unto vile affections: for even their women did change the natural use into that which is against nature: And likewise also the men, leaving the natural use of the woman, burned in their lust one toward another; men with men working that which is unseemly, and receiving in themselves that recompense of their error which was meet.
Romans 1:26, 27