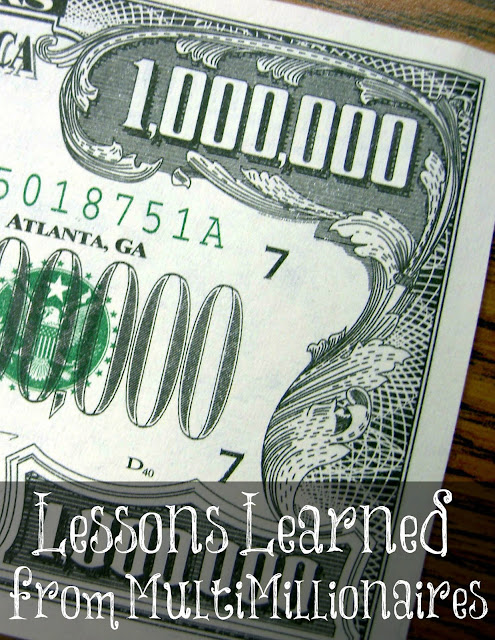 When it comes to frugality, my parents raised us to learn to wear things out or do without. We grew up having very little funds and sometimes even food was scarce. I {TheJoyFIlledWife} learned to be content with what I had and to wisely save, give, and spend. I have always been thrifty by nature, but sometimes to the extreme. The Lord showed me that I can make frugality an idol, just as much as I can make wealth one. Jesus looks at the intent of our heart.

When it comes to wealth, I have learned some of my most valuable lessons from several multimillionaires we're friends with, who started out living in small quarters with cracks, leaks, roaches, and not even a mattress to sleep on. Having come from humble beginnings and learning how to be frugal and wise as they gained their fortunes, they learned the importance of never using credit and delaying gratification until they had the cash to pay for what they wanted outright. They are, by far, the most giving people I have ever met, and they have been that way from when they were poor. The same people who judge them behind their backs for their wealth are the same people that these wealthy individuals anonymously arranged to have groceries show up on their doorstep week after week, paid for three months worth of their rent in secret, and anonymously paid in full the medical expenses they incurred from an unexpected catastrophe.

Perhaps one of the most life-changing perspectives I gained from the most successful people I know is their mentality when it comes to purchasing items they need or want. I'll never forget a story one of them told me about a time when they decided to surprise their wife with a brand new sports car that she has always loved since she was a child. The car cost several hundred thousand dollars brand new {which they paid cash for and had WAY more than enough to purchase} and when a friend of theirs asked what kind of a deal he got on it, the husband proceeded to tell the friend that he didn't initiate any negotiations on the car and was happy to pay the full asking price for the car. The friend was dumbfounded by the response and asked why the man would pay full price, especially since he had always been known as a great negotiator. The man explained that, if he would have tried to negotiate a lower price when he had plenty of funds for the asking price, all he would have done was take money away from the commission of the hardworking man who sold him the car. "I have been blessed with much and this man goes to work every day, hoping and praying he will sell enough cars to feed his family and put a roof over his head each month. I would have gained no pleasure in taking money away from his livelihood when I can easily afford to give him the full amount and help him provide for his family."

Moments later, several people walked by, looked down at the new car sitting there with the sticker price still on the window, looked over at the husband in disgust and commented, "Do you know how many starving children in Africa you could have fed with all the money you wasted on that car?" To which the humble man gently replied, "Do you know how many hard-working Americans are able to keep their jobs and feed their own children because I bought this car?"

The lessons I learned on both sides have given me a very balanced perspective and helped me to see Jesus' heart in the matter. There are many needy families out there would could benefit from the generosity of people who have more than enough. When finances are tough for families, good deals are a huge blessing! When they have been blessed with more than enough to pay cash for something new, though, they can bless others by helping them keep their jobs and put food on the table for their families.

One gives freely, yet grows all the richer; another withholds what he should give, and only suffers want. Whoever brings blessing will be enriched, and one who waters will himself be watered.
Proverbs 11:24, 25