My Experience with Public Schooling 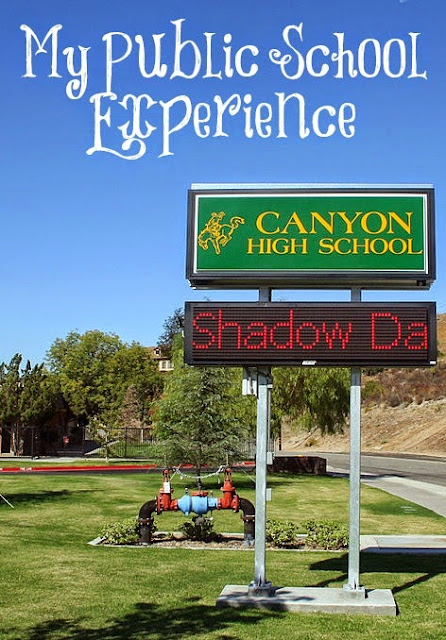 My education from second grader all the way through high school was in the public school system. This was during the 60s and 70s. Our Principal in our elementary school had a large paddle and used it when needed. Therefore, there wasn't a lot of misbehaving going on. My favorite part of elementary school was lunch, recess and going home. I LOVED tether ball, dodge ball and handball. I played so much I had callouses on my hands! My school had a large grassy area so there was tons of room to run and play. They gave us quite a bit of time outside. I never made any close friends at this school. I was teased a lot for how skinny I was and that I ate such healthy food. In fact, girls would call me on the phone calling me all sorts of names and making me cry. During one difficult time, a boy was sticking his pencil on my private parts until my mom called his mom and told him if he ever touched me again, she'd call the police, so he quit.

Junior High was not too memorable. I still didn't have any close girlfriends during these years. In fact, all through my years in public schools, I never found one godly friend who was being raised in a Christian home and living out Christian values. Our Bible wasn't ever read in my home growing up. We went to a very biblically-weak church all of those years. I felt very alone in my faith and my values but my parents did love Jesus. I was exposed to porn in this junior high. There was a disgusting picture on the ground that the boys had put there because they wanted to watch people's reaction as they walked by. I learned there was something called homosexuality for the first time.

I went to Canyon High School, a huge D-1 school for four years. The bathrooms were filled with mean girls who were smoking so I tried so hard to not have to go to the bathroom at school. Since I wasn't well-versed in the Bible, I have no idea if what I was being taught was unbiblical or not. We were taught evolution but I don't remember if they taught it as fact back then. There were parties I went to for awhile. They weren't fun parties. Everyone was drinking, smoking and fooling around with the opposite sex. I would hold a beer in my hand and pour it in the bushes when no one was looking, just trying to fit in until I heard that one of my 'friends' gossiped, "It's so cool that Lori is coming down to my level." I immediately thought, "No, I'm not!" and I quit going to them. My only good memory of high school was being a cheerleader my junior and senior year. I loved being a cheerleader!

I was teased in high school because I smiled too much. I was called a goody two shoes. My first date at 16 tried to have sex with me so I told him to take me home and he almost crashed on the way home. My mom did tell us to save sex until marriage. One guy, who I had had a crush on for awhile, finally asked me out. He was an hour late and completely drunk. I got into the car anyway and he took me to a party and directly into one of the bedrooms. I sat on the bed and told him to take me home. On the way home, he asked me if I didn't like him drinking and I said no, so he quit. One of my 'friends' from church had sex with her boyfriend in her home and told me all about it. I think most of my 'friends' slept around with their boyfriends and partied, even the ones in my church.

The only thing that kept me close to the Lord through all of this is having parents who consistently took  me to church every single Sunday and summer camp every summer. I attended Forest Home Christian Camp all of my years growing up and I was saturated in Jesus during that one week every summer. I always loved Him but I didn't realize what being a Christian full-time really looked like until I went to Westmont College when I was 18 years old. It was there that I learned to spend time in His Word, found amazing godly friends, and heard godly speakers in chapel every day.

I didn't like public school at all but it was all I really knew. I was lonely often since I had no friends with my values, which were rather weak. My mom was my closest friend and ally. I don't remember any teacher having much of an effect on me in a positive way as if they really cared about me. The classrooms were always so large that they didn't have time to really know their students. I felt like a number at these schools, mostly in junior high and high school. I did things that my conscience convicted me about and I knew were wrong so I did have a moral compass but not much support to live a godly life. My parents were raised in a much more innocent time so they had no idea what I was exposed to and I didn't tell them much about the junk. My memories of my growing up years are not fond at all, however, the Lord has restored the years the locusts have eaten. I loved my college years, married an amazing man, was blessed with four wonderful children and the Lord has graciously given me this ministry which I love. For all of these, I am very thankful.

And we know that all things work together
for good to them that love God,
to them who are the called according to His purpose.
Romans 8:28
photo source

***Voddie Baucham gives Top 5 Reasons NOT to send you children back to public schools.