Introduction to Created to Be His Help Meet 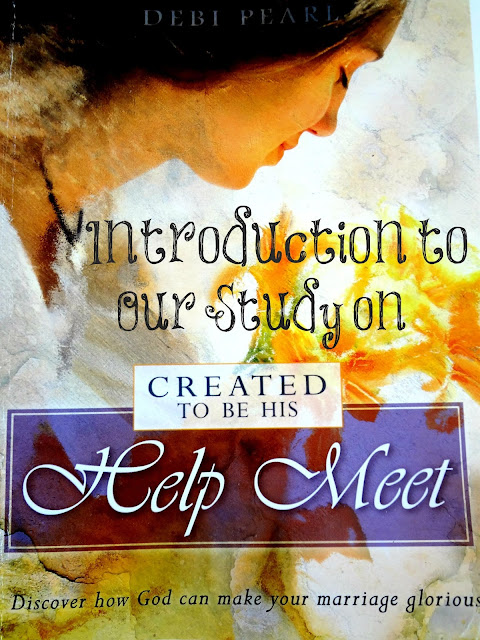 On Monday, November 16th I'm going to do a study through this amazing book that has radically changed my marriage.  As the Interior Design study is drawing to a close, I was trying to think of another book I would like to teach. Then it dawned on me that I should do the book that has been instrumental in changing me and many others.

I will be using the same book I have mentored many woman through. It is the first edition and was published in 2004. My mom gave me this book in 2005 and I was immediately convicted and challenged by Debi's words. I had read many Christian marriage books through the years since it was my deepest desire to be a godly wife but for some reason, none of them have challenged me the way Debi's did. I am strong-willed and I guess I needed another strong-willed woman to say it like it is.

Shortly after my mom gave me this book, we heard that the Pearls were going to be giving a conference a few miles from our home. I wanted to go badly. It was going to be a week-long conference with Michael Pearl teaching the book of Hebrews. The first night was going to be on marriage. Ken decided to go since he saw the change in me and wanted to meet this couple.

After the first night, Ken was hooked and we ended up making almost every session of this incredible week. We learned so much from Michael and I would even say today, eleven years later, that he is my favorite Bible teacher. He studies the Bible six hours a day and loves the Lord dearly. He's a tall, gruff man but when he sings old hymns about the Lord with his arms lifted high or even during times when he was teaching us about God's love, tears would spring from his eyes.

There was one session that Debi Pearl spoke to the women about her book. She was so fun to watch. Every session that Michael was teaching, she would sit on the front row and keep her eyes on him the whole time; many times nodding her head and smiling at him. One day, she was a bit late for the session and she came waltzing down the isle. He made a quick comment like, "She still turns me on!" Everyone could tell how crazy they were about each other. A few of their children and their spouses were there and they were friendly and joy-filled. You could tell that they loved the Lord and their joy came from knowing and loving Him.

On the last day, they had a church meeting since it was Sunday. We brought our children and they enjoyed it. They were impressed with Michael's teaching and loved the warmth of the people. All the women were dressed modestly, only hymns were sung and men were the only ones who spoke. They take the Bible literally but they love fiercely and are some of the happiest people I've ever been around.

Since this is the book I have used to mentor many women, I thought it was time I went through it with all of you. Even if you don't have the book, I hope you will learn a lot from what Debi wrote. The newer editions have added chapters and she has softened some of her earlier language. She listened to the critics and changed some things women found offensive. Since I have the original book, I won't mention some of the offensive things unless I don't realize they are some of the things that have been removed! {You can get the 2004 edition used on Amazon.}

I pray this study will be as much of a blessing to you as it was to me. May the Lord be glorified through all that we learn and please feel free to comment and ask questions; even give your testimony if you feel so led.

That they may teach the young women to be sober, to love their husbands, to love their children, To be discreet, chaste, keepers at home, good, obedient to their own husbands, that the word of God be not blasphemed.
Titus 2:4, 5