Please STOP Living Under the Law! 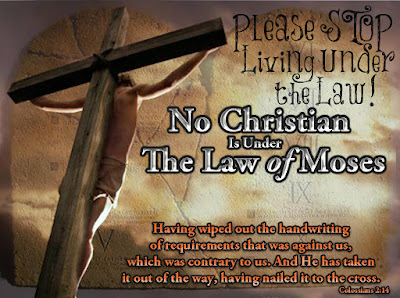 Many Christians still believe they are under the Law. I am going to try to convince you that we are NOT under the Law and are freed from it in Christ. The Law was given to the Jewish nation; God's chosen people. It was to point out their sin and their need for a Savior. It was very strict and the judgments for breaking the Law were severe; included stoning for various sins. Every year, the Jews had to sacrifice animals for "without the shedding of blood their was NO forgiveness." This is why they built the temple and had a place to worship and sacrifice; for payment of their sins.

Jesus came to earth as a Jew. He walked in a time when those He was teaching were living under the Law. During His time on earth, He clearly showed the people how impossible it was to satisfy all of the requirements of the Law and how we all need a Savior. He exposed the heart of the law on the Sermon on the Mount to show that no one has a heart completely capable of keeping the Law, but the one true Messiah, the Son of God, came in the flesh to deliver us from the curse of the law. Yet He continued to live under the requirements of the Law since He was perfect and the only one who could obey it perfectly. He never had to sacrifice for His sins since He NEVER sinned. He was the ultimate sacrificial Lamb, the Promised One, who died and paid the penalty for our sin by shedding His own blood on the cross.

The New Covenant {parts of Acts, Romans to Revelations} was written specifically for Christians and the Church age we are presently living in. God's purpose was to first show His holiness in all of the areas one is to please Him under the law, for He is completely holy. But this was just part of his plan for mankind. His ultimate purpose was to do away with the wooden law of letters written on tablets and ordinances and replace it with a new law written on the hearts and minds of His newly adopted children. For we were once strangers and aliens to the family of God and under the curse of the law, yet Christ on the cross fulfilled the law so that you and I, who are "in Christ Jesus" can no longer be seen as constantly disobedient people, but instead cherished and loved children of God.

"But this is the covenant which I will make with house of Israel after those days," declared the Lord, "I will put My law within them and on their heart I will write it; and I will be their God, and they shall be My people" {Jeremiah 31:33}.

If you have somehow missed this important part of His-Story and are failing to see our God no longer as an angry God who is keeping score of your dos and don'ts, then you have missed out on the beautiful story of what God is doing in history. God is going about redeeming mankind, not so that we can be obedient because "we have to," but to be  obedient from the heart because we love him so much and want to please our heavenly Father. God wants a relationship with us, not to be our judge and jury, but to be intimately entwined with our lives as we share an eternal relationship with us. If perfect love casts out fear, than we have nothing to fear from a Father who would love us so much as to give us His only Son.

When He died, He died to the Law, thus we die to the Law the moment we believe in Him. When He rose again, He made all those who believe in Him new creatures in Christ. The Law was a taskmaster whose purpose was to lead us to Christ. Christ's final words on the cross were "It is finished!" He completely fulfilled the Law and paid the penalty for all sin, thus conquered sin and death; He brought in a New Covenant of grace for all those who believe upon Him. Thus, we are NOT under the Law!

Please study the verses I am going to give you to back up all I just wrote! I also want to tell you not to try to put me back under the Law as the entire book of Galatians was written for the sole purpose of rebuking those who were trying to put others back under the Law. Paul called those who did this "heretics" {A man that is a heretic after the first and second admonition reject. Titus 3:10}. Even the Sabbath and tithing were part of the Law and given specifically to the nation of Israel, the Jewish people, as a shadow of what was to come; Jesus Christ who made a New Covenant for us to live under, the Law of Grace!

Therefore by the deeds of the law there shall no flesh be justified in his sight: for by the law is the knowledge of sin. {Romans 3:20}

For sin shall not have dominion over you: for you are not under the law, but under grace. {Romans 6;14}

Wherefore, my brethren, ye also are become dead to the law by the body of Christ; that ye should be married to another, even to him who is raised from the dead, that we should bring forth fruit unto God. {Romans 7:4}

But now we are delivered from the law, that being dead wherein we were held; that we should serve in newness of spirit, and not in the oldness of the letter. {Romans 7:7}

For the law of the Spirit of life in Christ Jesus hath made me free from the law of sin and death. For what the law could not do, in that it was weak through the flesh, God sending his own Son in the likeness of sinful flesh, and for sin, condemned sin in the flesh: That the righteousness of the law might be fulfilled in us, who walk not after the flesh, but after the Spirit. {Romans 8:2-4}

But if the ministration of death, written and engraven in stones, was glorious, so that the children of Israel could not steadfastly behold the face of Moses for the glory of his countenance; which glory was to be done away: How shall not the ministration of the spirit be rather glorious?...For if that which is done away was glorious, much more that which remains is glorious.
{2 Corinthians 3:7, 8-11}

But their minds were blinded: for until this day remains the same veil untaken away in the reading of the old testament; which veil is done away in Christ.
{2 Corinthians 3:14}

For I through the law am dead to the law, that I might live unto God. {Galatians 2:19}

I do not frustrate the grace of God: for if righteousness come by the law, then Christ is dead in vain. {Galatians 2:21}

O foolish Galatians, who hath bewitched you, that ye should not obey the truth, before whose eyes Jesus Christ hath been evidently set forth, crucified among you? {Galatians 3:1}

For as many as are of the works of the law are under the curse: for it is written, Cursed is every one that continues not in all things which are written in the book of the law to do them. But that no man is justified by the law in the sight of God, it is evident: for, The just shall live by faith. And the law is not of faith: but, The man that does them shall live in them. {Galatians 3:10-12}

Christ hath redeemed us from the curse of the law, being made a curse for us: for it is written, Cursed is every one that hangs on a tree. {Galatians 3;13}

Is the law then against the promises of God? God forbid: for if there had been a law given which could have given life, verily righteousness should have been by the law. But the scripture hath concluded all under sin, that the promise by faith of Jesus Christ might be given to them that believe. But before faith came, we were kept under the law, shut up unto the faith which should afterwards be revealed. Wherefore the law was our schoolmaster to bring us unto Christ, that we might be justified by faith. But after that faith is come, we are no longer under a schoolmaster. For ye are all the children of God by faith in Christ Jesus. {Galatians 3:21-26}

Having abolished in his flesh the enmity, even the law of commandments contained in ordinances; for to make in himself of twain one new man, so making peace. {Ephesians 2:15} Christ abolished the Law!

Paul tells us how he obeyed the Law but concludes with "But what things were gain to me, those I counted loss for Christ. Yea doubtless, and I count all things but loss for the excellency of the knowledge of Christ Jesus my Lord: for whom I have suffered the loss of all things, and do count them but dung, that I may win Christ, And be found in him, not having mine own righteousness, which is of the law, but that which is through the faith of Christ, the righteousness which is of God by faith. {Philippians 3:7-9}

Knowing this, that the law is not made for a righteous man, but for the lawless and disobedient, for the ungodly and for sinners, for unholy and profane, for murderers of fathers and murderers of mothers, for manslayers,... {1 Timothy 1:9}

For there is verily a disannulling of the commandment going before for the weakness and unprofitableness thereof. For the law made nothing perfect, but the bringing in of a better hope did; by the which we draw nigh unto God.
{Hebrews 7:18, 19}

For if that first covenant had been faultless, then should no place have been sought for the second. For finding fault with them, he saith, Behold, the days come, saith the Lord, when I will make a new covenant with the house of Israel and with the house of Judah. {Hebrews 8:7, 8}

In that he saith, A new covenant, he hath made the first old. Now that which decays and waxes old is ready to vanish away. {Hebrews 8:13}

If you are still convinced we are under the Law, please listen to Michael Pearl explain Galatians and find the freedom from the Law that Jesus died to give you. We are FREE! We are His children. He is our Father. The Law no longer holds us captive!