He Is Better Than My Husband!

When you see a couple that gets along great, doesn't argue, and seems like best friends, don't you tend to think, "He's just a great husband.  He must be so much easier to get along with than mine..." or something along those lines.  I know I sure did.

My sister-in-law, Vicky, is married to her "soul mate" as she tells me.  I remember watching them in the kitchen working side-by-side years ago.  They were kind and patient with each other.  They were always calling each other "sweetheart" or some other endearing name.  I just kept wishing my marriage was like that. My thought was,  "My brother-in-law must just be a much easier man to be married to than Ken."

The problem was that I would see several marriages like that through the years and just think they were lucky.  Their personalities fit better than our's did.  I wish someone would have opened their mouth and told me that I could have a good marriage also.  There was a lot I could do to accomplish that goal.

I have read many marriage books.  Most women that have great marriages aren't exactly sure what they are doing right.  They were modeled a good marriage by their parents usually and just know what to do to make a great wife.  They are kind and considerate to their husbands.  They just want to make them happy.  It comes natural to them.

After I have mentored a couple and they are doing marriage "right", I tell them to open their mouths and tell others the secrets to a good marriage....Not arguing, being joyful, not trying to manipulate, change or control. If you don't share your success with others, they will just think you married a much better man than they did. 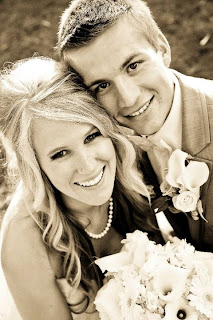 This precious, young couple that we mentored is taking my advice.  They dated six years before they married and their test scores were unbelievable!  They were such a match made in heaven.  My advice to her at our last counseling session was to TELL others why their marriage is so good.  I found this on her facebook page ~ True Love Never Fails.  She started a blog to encourage others to have a great marriage.  I love teachable spirits...Their love will last...

They {any woman that has a good marriage} should encourage the younger women to love their husbands, to love their children...Titus 2:4