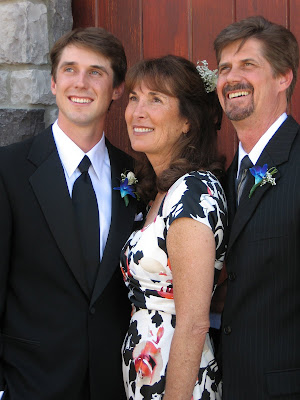 One should not brag about their children, I have been told.  I disagree.  We should praise everyone.  The world does a good job at tearing people down.  We are called to be people who encourage others.

Praise your husband, children, neighbors, church, and God to those around you.  Sure, everyone has faults, but everyone needs praise and encouragement...

So I am going to use this post to praise Ryan, my oldest son...

He was easy to raise...There was never one teacher in all of his school years that he disliked or criticized.  He never said anything critical about his friends or even coaches and he had some pretty rough coaches.

All the children in the neighborhood wanted to play with him because he would play with them no matter how old he was, even as a teenager.

Ken and I would get after him because he was so easy going.  We are go-getters and move fast.  As he has matured into a young man, we see that he is different than us, but he is good with many wonderful qualities.

He picked an absolutely incredible wife and has an adorable baby girl.  He has always walked with Jesus and shows it by the way he lives his life.

While visiting my dad at the hospital last week, my dad told us something that happened seven years ago after he had prostate cancer.  While he was telling us this, he was all drugged up and could hardly talk, but he wanted Ken and me to hear this story.

He said hardly anyone would come up to his room to check up on him after his prostate surgery except a foster child, that was visiting  that summer, and Ryan.  Every four hours, Ryan would check on him.  Dad got teary-eyed remembering Ryan's concern and love for him.

I hardly ever remember Ryan getting angry.  He has a really long fuse...He doesn't seem to worry about anything.  Erin likes his strong, steady personality.  He is her rock.  They fill in each other's gaps.  They are perfect for each other.

No, Ryan isn't perfect.  None of us are but I try and only focus on the good qualities in others and he has many.  I would say to know Ryan is to love him!

I have written unto you, young men, because you are strong, and the word of God abides in you, and you have overcome the wicked one.
I John 2:14b

Let no corrupt communication proceed out of your mouth, but that which is good to the use of edifying, that it may minister grace unto the hearers.
Ephesians 4:29

Posted by Always Learning at 7:58 PM