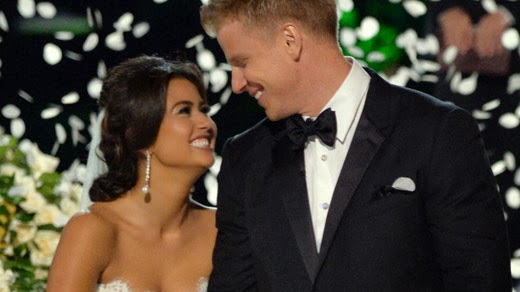 Yes, I watched Sean and Catherine get married.  I first watched The Bachelor many years ago because a girl Alyssa went to school was in it and made it to the final two.  I was appalled at the show and knowing so many young children from the school were watching a man make out with multiple women.  Yuck!

The second time I watched it was when Sean was the bachelor since I heard he was a strong Christian and I was very ill at the time and was looking for diversions.  I still was very disappointed how often he was kissing the girls and the immodest clothing of the girls.  It is not a show I would ever recommend to anyone!  He didn't have sex with any of them, thankfully.

However, I did watch Sean and Catherine's wedding and I was impressed how they saved themselves for marriage and how the people organizing their wedding were impressed with them for doing that.  When asked if it bothered them that the media made such a big deal about it, Sean replied, "It is too bad because it is such a small part of my faith."

His father married them and looked at Sean and commended him for always staying strong in the faith and not being ashamed of the Lord Jesus Christ. {Those weren't the exact words but close.}  Before the wedding, all the groomsmen gathered around him, put their hands on Sean, and prayed to Jesus.

When a couple saves themselves for marriage, it is a beautiful thing.  I don't know about Sean or Catherine's past.  I have heard Sean give his testimony for Jesus and he definitely loves Him.  I do know that it is always a good thing when God's ways are spoken of, unashamedly, for the world to see.  This world needs good role models and I applaud Sean and Catherine for standing up for purity before marriage.

Jimmy Kimmel had both of them take a lie detector test and they both passed.  HERE is the clip of it.  It is pretty funny.  No, I will never watch The Bachelor again, unless they make a Christian version!  It is not a decent show.  How would you like the guy you were dating and falling in love with kissing and making out with other women?

Marriage is to be held in honor among all,
and the marriage bed is to be undefiled
Hebrews 13:4