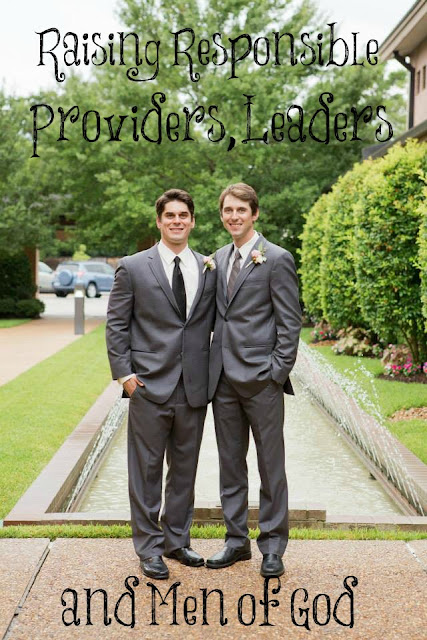 The Joy Filled Wife wrote me this text yesterday, "What do you think were the most important steps you and Ken took in parenting your sons that made them grow up to be responsible providers, leaders, and men of God? I look around and see how immature most grown men are, even those who grew up in Christian families, and I'm wondering what was missing in their upbringing that caused them to never grow up and want to take responsibility for leading a family. What do you think?"

I asked Ryan, my 30 year old son, what he thought. The first thing he said was we never allowed televisions or computers in their rooms. None of them had cell phones as long as they lived in this home. We didn't give them a lot of stuff. If they wanted things, they had to work for it. He got a job at 16 and has had one ever since. {All of his bosses loved him and hated to see him go because he worked hard, always showed up on time and was kind to others.} Ryan said too many kids are given anything they want. They just ask their parents and don't learn to work hard, just like our government giving away money to many who don't want to work. It makes them lazy. When our children were 16 years old, they drove an old 1984 diesel Mercedes {that went from 0 to 45 in 15 minutes flat!} to school while other children were getting new cars for their birthday. We had high expectations for them and expected them to live up to them, including working hard, being kind, loving others and being generous with their time, money and talents.

When I asked Steven, my 28 year old this question, he said it was having a dad who was integrally involved in his life. He watched his dad work hard to provide for us, saw that he was a man of integrity, willing to help and serve anybody in need, generous with what he had and taught them the Word of God. He modeled how a good husband and father lives his life. He said that Ken would often tell them that hard work will always beat out intelligence and talent.

We also kept them very busy. During junior high and high school, they were always playing a sport. During high school, they went to school, studied and practiced hard for varsity baseball and basketball which left them little time to be lazy. Some of their coaches were hard on their players, yet my sons never argued back. We never got a bad report about them from any principal, teacher or coach. In fact, we only heard good things about them. Ken was hard on them, especially with sports. {He coached a lot of their teams when they were young.} He wanted them to play hard, do their best and not give up. However, they always knew their daddy loved them deeply.

We taught them the Word of God consistently. We were always teaching them right from wrong from the time they could crawl. We never allowed them to be mean or fight with each other. We taught them early that life wasn't fair and that "Alexanders love each other." We disciplined them often when they were very young and wouldn't let them get away with disobedience. As soon as we saw any rebellion, we'd nip it in the bud. Therefore, they grew up to be disciplined adults.

I told Ryan that when they were younger Alyssa asked me why all her friend's brothers were perverts and had garbage decorating their rooms at home but Ryan and Steven weren't perverts and never decorated their rooms with trash. Ryan replied, "That would have NEVER been allowed in our home." They knew the danger of pornography and we were strict with what they could watch, even through high school.  We talked to our children a lot. Nothing was ever off limits. Even when they were teenagers, we continued to mentor them in the ways of the Lord and set boundaries for them.  We protected them from the garbage of the world. We home schooled them through junior high, when most young boys are introduced to pornography. They went to a biblically sound high school and college. We were open with them about sex and always treating girls with respect, waiting until marriage to have sex.

We trained them in the ways of the Lord. We knew what habits to build in them, which ones to get rid of and worked consistently with them to be strong men of God. They both are very happily married now to beautiful godly women. They work hard and provide for their families. They are faithful in attending church and cling to the Lord and His ways. Ken and I frequently talk about our children and how blessed we are with all of them. They are our greatest joy in life. We would have had more if I hadn't gotten so sick. God's grace and His Spirit gave us the ability to obey Him and do things His ways. He gives us the wisdom to raise godly offspring and children who are productive members of society. If you are a believer, you have His grace and Spirit poured abundantly upon you also and can raise godly offspring but it takes a lot of time and energy. Nothing good in life comes easy.

And, ye fathers, provoke not your children to wrath:
but bring them up in the nurture and admonition of the Lord.
Ephesians 6:4