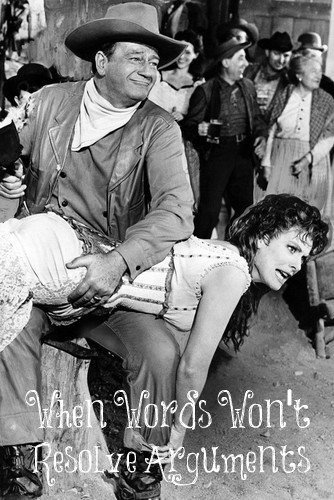 A couple were in an argument over where they should eat dinner. He was taught "therapy and a formulaic mode of sensitivity" for solving disagreements and that "talk was the sole means of alleviating human friction." Usually, when they argued, he would have stormed off since talking wasn't working. This time, however, he picked her up "damsel-in-distress-style, catching her off guard, they kissed and went happily off to dinner... Talk can yield clarity, understanding and empathy, but sometimes it just brings exhaustion and recrimination. Sometimes action is the only pathway to good will. And when I picked her up, I proved it."

Men don't like to always use words to solve everything, whereas women do. Marriage conferences teach how couples should "fight fair;" remembering to take all these given steps, asking the right questions, listening carefully, keep talking until its resolved, etc. How come women have mostly gotten their way in resolving conflict and men have to accommodate them? {"Now, honey, you forgot this step and you aren't allowed to say that to me."} This is NOT how it should be in a Christian marriage!

Just a few years ago, a man many of you remember, had a difficult wife. He does admit to not being perfect {which nobody is} but their marriage was falling apart. He took measures, instead of just"talking" to save his marriage and NONE of them included hurting his wife physically in any way. His marriage is fantastic now and his wife is thankful he did what he did to save their failing marriage.

Another time, I wrote about a wife continually disobeying her husband by putting knives in the dishwasher. He knew the dishwasher would ruin good knives. When the dishwasher broke, he refused to buy her a dishwasher {just for a little while as it turns out}, but many thought her husband was being completely unreasonable and some even said he was abusive. {Of course, they were all women who said this.} She was also thankful he "nipped rebellion in the bud" and stood up to her since her desire was to respect and obey her husband as God commands.

We do live in a feminized society. Women want men to behave like women and "talk" everything out. One of the couples Ken and I mentored were on the brink of divorce. The wife would have major, uncontrollable tantrums. She admitted she "just couldn't control herself." Ken told the husband to wrap her up in a bear hug every time this happened. She liked the idea and it worked! They are happily married many years later.

Ken and I watched an old John Wayne Movie a few months ago. He was married to a very difficult wife. She was always nasty to him. Near the end of the movie, he took her over his knee and spanked her! She behaved herself after this and they were kissing and enjoying each other at the end of the movie. I guess this was a common occurrence in many of the old movies! {Can you imagine a movie like this today? No, instead we get perversity of every kind but if a man acted like John Wayne, he'd be put into prison.}

Most men don't like to just "talk it out" ad nauseam. They're sick of arguing with their wives and would love to have some way to just STOP the arguing and have peace. This is all most men want; peace and joy in their homes. As many of you know, I encourage wives to NOT argue with their husbands since we are commanded in the Bible to not argue and God has ordained the husband as the leader of the home. However, since most women like to control their husbands, many marriages are filled with strife and arguing.

Maybe the next time you are arguing with your husband, he should sweep you off your feet or hold you in a bear hug; anything to stop the argument! Godly husbands should have a way to take leadership and stop the merry-go-round that so many couples are on, as long as it is not physically abusive, of course. Men get sick and tired of being politically correct according to feminist's laws and always having to talk everything to death. After all, they are men and we should appreciate their masculinity instead of trying to stifle it. I dare you to let your husband read this post and tell him that he should be creative with you whenever you ever argue with him or get out of control! A huge part of respecting your husband is respecting the way he wants to lead you.

For this is how the holy women who hoped in God used to adorn themselves, by submitting to their own husbands,  just as Sarah obeyed Abraham, calling him lord, and you have become her children if you do what is right without being frightened by any fear.
1 Peter 3:5, 6