We are the Virtues We Embrace! 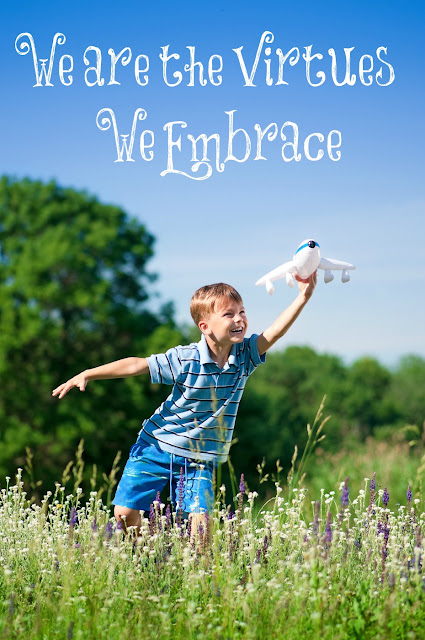 Kris Vallotton wrote something so profound that I felt compelled to make it into a post so we can have a defense when we hear it be said that a child knew they were homosexual when they were a child since they were always attracted to the same sex or if a child ever says this to you, especially your child since our society is getting very confusing for children and sexual identity is NOT set in stone as a child. If they go to public schools, they will probably be taught they can be a boy or girl and when they grow up, they can have sex with a man or woman. It's their choice. You must counter this with Truth.

On July 4th, USA Today ran this article with this boy's picture; "I'm homosexual and I'm afraid about what my future will be and that people won't like me," reads the caption on the widely-distributed portrait of a teen sitting on a stoop in a collared shirt and teal cardigan. The shot was taken by Brandon Stanton for Humans of New York, his popular and prolific photo series known to illustrate microcosms of emotion in America's most populous city.

This article demonstrates perfectly the overwhelming concern that I wrote about just a week ago. When a person says, "I have been attracted to the same sex since I was little, that's how I know I am a homosexual;" that scares the crap out of me!

All boys and girls are attracted to the same sex, at least until they hit puberty. Little boys think like little girls have cooties and vice versa. Let's be clear, homosexuality is NOT same sex attraction, it is same gender sexual attraction; you want to have sex with somebody of the same gender. To say you wanted to have sex with anyone before you hit puberty is rare and usually is the result of sexual abuse.

Furthermore, to teach a young boy like this that they might be a homosexual because they like the same sex is not only inaccurate, it's destructive. To be honest, this is my greatest concern. I do believe there is such a thing as same gender, sexual attraction but we all have many attractions throughout our lives. Many of them are unhealthy and must be managed with self-control. Yet we are not the temptations we resist; instead, we are the virtues we embrace.

Furthermore, healthy, straight men and women will always have a same gender, not sexual, attraction. This is normal. For those of us who believe the Scriptures, Jonathan and David made a covenant together. Their love for one another was greater than their love for a woman. This is common among young warriors who fight battle together and protect each other's lives. Every war veteran can attest to this. BUT this has NOTHING to do with sex; it's a covenant, a heart connection.

And beside this, giving all diligence,
add to your faith virtue; and to virtue knowledge.
2 Peter 1:5

***Should Christians attend gay weddings? I don't think so. By attending, you are giving approval to two homosexuals who are committing to practicing homosexuality which God calls an abomination {Leviticus 20:13}. Will you go to a polygamous wedding, an incestuous wedding or bestiality one, since we should be able to marry anyone we love? Gay marriage makes a mockery of what marriage is designed to model; Christ and His church. If you want to go to be Jesus to them, will you love them enough to tell them to "go and sin no more?" What about the last verse in Romans 1 where Paul describes the progression of sin and ends with this verse, "Who knowing the judgment of God, that they which commit such things are worthy of death, not only do the same, but have PLEASURE IN THEM THAT DO THEM."