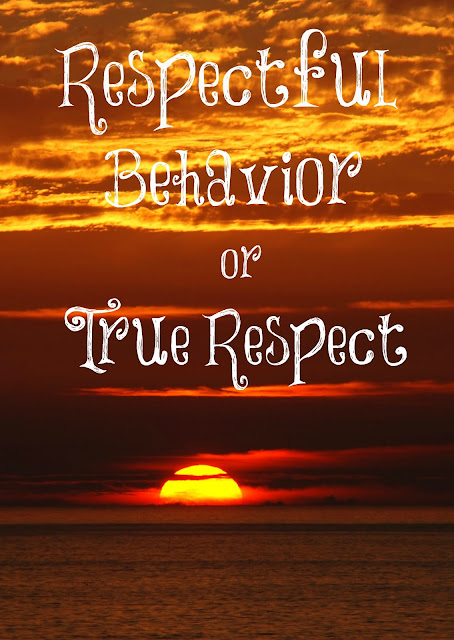 Let me {Ken} ask the question and see if I can get a thoughtful response. Do you respect your husband or do you just give him respectful behavior? Think with me a moment and you will see the significant difference between the two thought patterns. With one, you are going through the motions of showing respect and with the other you actually believe your husband deserves or has earned your respect. The first responds out of  duty and the later is motivated by respect.

What triggers this question is reading one more Christian blogger emphasizing that that wifely submission is a willful act and not one a husband can force upon his wife. Amen to that! For that matter, it seems that a good husband can do all the right things that will earn the respect of the world, his boss, his employees, his secretary, even his church as a church elder, but far too often doesn't have a wife who truly respects him. She may show him respectful behavior most of the time, even claim that God demands of her to be submissive and respectful, yet she is far from a mindset of true respect for her husband. Obedience to Christ is an easier road than giving up control of her mindset that her flawed husband might be worthy of her respect.

“Wives be in subjection to your husbands,” and “the wife see that she reverence her husband” {Ephesians 5:22 & 33}.

The word phobetai comes from the word phobos; to frighten or be alarmed, and it means by extension to hold one in awe or to revere. Now I know not many Christian wives hold their husband in awe or reverence. My wife was taught early in marriage by other wives that it was best to be sure to keep her husband’s ego in check, and each time he was successful at something, or deserved her praise, to help insure that he did not get prideful by teasingly putting him down in some way. Isn’t this a part of a wife’s role to make sure her husband doesn’t get a big head?

For that matter, no matter how hard I worked, no matter how much I moved up in my profession, or earned more, bought her the bigger home, played more with the kids, you name it, I could not earn my wife’s respect, let alone her submission. Something held her back.

Long walks with long talks, emails back and forth, and many arguments, all ended with me scratching my head as to why, no matter how hard I tried, I could not get my wife to honor me for all I was doing for her and the family. Finally one day, I did something I thought I would never do.  I played the submission card. I actually told my wife that God tells her to be submissive and respectful towards me. In return I got the retort, “I know, but you can’t make me!”

Those days are long gone and with a lot talking, help from Debbie Pearl and the Spirit of God, my wife changed into a godly and beautiful wife, giving up her need to be in control and instead, acting respectfully towards me. It is a wonderful, peaceful and fulfilling marriage to know that your wife is trying hard to please God, and in turn, pleases me.

But I am left with the lingering question? What the heck is wrong with women who after watching their husbands bust their tails for them, willing to die if necessary, yet their man cannot command their respect without it being a command from their Lord? Correct me if I am wrong, ladies, but many non-Christian women respect their men who have many qualities and contributions to the marriage and family, and yet we have to keep trying to move one Christian wife after another through a difficult journey of first recognizing Jesus as Lord, then reminding them that God asks them to respect and please their husbands. Why not just respect your husband because he deserves it?

Certainly a Christian husband is willing to accept that a wife is submissive and respectful out of obedience to God, but that is not where she should stay. The journey to one flesh marriage should not end until one is obedient from the heart, not just obedient in actions. God does not desire our love to stop at a place where we love Him for the salvation He brings us, but He wants our love, respect and submission because everything about Him deserves it. Sure the first command is “love the Lord your God,” but ultimately a mature love grows from obedience to willful adoration for the very nature of God.

OK, I get it. Your man is flawed and God isn’t. It’s interesting how everyone around your husband highly respects him, but you think you have the inside scoop and he really isn’t worthy of your respect. Perhaps you can be respectful towards him, but to really respect him and tell him so, he just isn’t there yet. "My husband is not worthy of my awe or reverence because ___________." {You fill in the blank.}

I can understand that some Christian husbands do some pretty disrespectful things, maybe even disrespecting their wife, which is unacceptable. I will not tell a wife to respect a husband who is unworthy of respect, but I will tell you that God says you are to reverence your husband. If you do not reverence him, start asking the question, “Why not?” Is it that he would not take a bullet for you or defend your home and nation if called upon to do so? Is that he cannot be trusted to stop an intruder if one arrives in your home, but instead might slip out the back door and leave you and the kids to defend yourselves?  Is he a bad provider, not working hard so that the family has food on the table and a roof over your head? Is he a drunkard, a liar, a thief, a sex addict, or a sociopath? If so, I get it that you don’t respect the character flaws in him; to be respected, one must be respectable.

When Lori counsels a woman she usually spends the first 20 minutes listening to all the woman's gripes about how bad her husband is. Then she challenges them to make a list of all their husband’s good qualities. It is a few minutes later that the wife generally exclaims, “Wow, I am married to a pretty good guy!” So tell me, what is it in a woman that she focuses so myopically sometimes on the forest that she can’t see the trees of her husband’s goodness and strengths? His overall strong character traits?

It could be part of a woman's greatest battles with sin, the desire to be in control, and try to remold her husband into who she thinks he should be to best meet her perceived needs. With churches teaching husbands to love their difficult wives anyway, and try to meet their needs, we find husbands on a tread mill they can never get off, until they go back to God’s Word and recognize that instead of chasing a wife’s perceived needs, they must take the lead and head up the marriage. Instead of being a help meet to a wife, the wife should be his help meet, following in submission and respect. Not just because the Bible tells his wife to be submissive, but because he has earned her respect, even if she cannot see it.

For some husbands, I am sure this was a much easier task to gain their wife’s respect than for many of us who are pleasers at heart. We want to please our wives and we think that by submitting to their will and demands that someday true respect will come. Well, I hate to break the bad news, but there are far too many Christian women who think they will respect their husbands if their husbands just shape up and do things their way, but the reality is that the only way they can gain their wives' respect is to stand up to them and say, “No, I will not play this backward game anymore. You follow me as I am done following you, and let me model for you what true love looks like, and what respect and discipline look like." Instead of falling for the same old sin of the garden; Adam listening to his wife who is trying to make sense when God’s Word already said it was nonsense; a wife leading and a husband impotently following her lead to keep the peace, or to not lose out on intimacy.

So I ask one more time in closing. I get it if you needed to read a Christian blog where you were told to love, submit and respect your husband and you did it out of obedience. That was a great start, but far from the finish line. God wants a Christian wife is where she truly reverences her husband because she can see clearly that he deserves and has earned it. It shouldn’t take 5-10-15-25-35 years for a wife to know her husband would die for her, even if he is not a perfect man. For a husband to know his wife respects him as a man and as her lover, not that she is being respectful just out of obedience to her God.

Evaluate your motives and get them right. Initial obedience to God should blossom into true love and respect for your husband. If it’s not, search your own heart to see why before blaming him. He might be the guy who would take a bullet for you, or who loves you when you are being difficult and disrespectful; all things worthy of great respect.

Pay to all what is owed to them;
taxes to whom taxes are due,
revenue to whom revenue is due,
respect to whom respect is due,
honor to whom honor is due.
Romans 13:7