Men are Happier with Wives at Home! 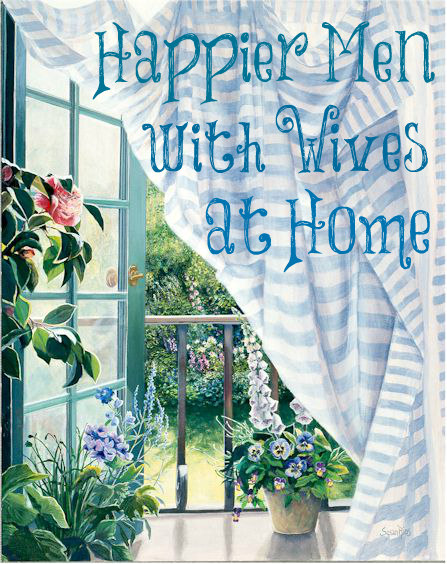 It's always encouraging to see articles written that support God's plan for us as being best! When feminism convinced women that they were bored at home and there was much more for them "out in the world," the majority of women failed to ponder the long-term consequence of this choice and instead went with their feelings and short-sightedness by leaving their homes. They left their children with others, swarmed the universities and took over many men's jobs. Now, children are being raised by strangers, most universities have more women than men, and many men are out of work. Back in the 1950s, just 3% of men in their prime working years were out of work and not seeking employment. Last year, that number was 12 %. Things began to change in the 60s, just as the feminist movement was rearing its ugly head when women streamed into the workforce. Now 60% of all bachelor degrees are held by women! The Women's Rights Movement is cheering these statistics. "Hooray! Look at what women have achieved; more hold jobs than men and more are highly educated than men. Hip, hip, hooray!"

How does unemployment affect men? Here are the words from a highly educated man who can't find a job since so many women have taken over the job market and he has been looking for years. "Here's where the second ugly truth came up. You can't be a guy and get a job in fields that are dominated by women. Most doctors may be men but most support people are women. And all administrative assistant/secretarial/clerical jobs are filled by women. You would think women would be understanding about sexism. But I found that women definitely do NOT want a man to intrude into their work environment....The pain and anguish and despair at time was unbearable. Everything I worked my entire life to achieve is gone. And it's not coming back. I haven't cried in about a year because there are no more tears. I can't even do the things that I used to take for granted...I don't have any money. I can't get a date. Even if I could meet a single girl, I can't ask her out. I don't  have an apartment to bring her back to. I have nothing. Actually, that's not true. I have two parents who love me and a roof over my head and foot to eat...I had a blood test this morning. There's nothing wrong. It's something my mom wants me to do each year as part of a regular check up. I pray that the results come back with cancer or leukemia or something that will cause my demise. How sick is that? But I pray for the sweet release of death every night. My life ended six years ago. Now, I just exist. And I don't want to anymore." Men are MADE to work and provide.

Depression in our society has skyrocketed since the 1950s even though our needs are so much more abundantly met than in the 50s. "Since 1956...the rates of depression in the general population have skyrocketed. Depression has become widespread where it was formerly rare, recurrences have become more common, inter-episode recovery has declined, and long-term disability has increased." This article continues with trying to figure out why this is true since our life spans are so much longer, people have more money and things, etc. I can tell you why! Men who aren't working are depressed. Men who have wives who work are depressed since they no longer have help meets and have to help with the home and children and receive little intimacy. Women who work are depressed since they are exhausted and can't juggle everything. Women who don't work are depressed because they're made to feel guilty for not working and they aren't being taught to find joy being at home. Now, I realize these are generalizations but they have to be a HUGE factor to depression skyrocketing in our present day and age. The farther we go from God's plan for our lives, believer or unbeliever, the unhappier we become.

However, the feminists fail to see the destruction they have caused and continue to yell, "Hip hip hooray but the fight isn't over. Now we have to fight for equal pay. Who cares if many men are unemployed and distraught." The unemployed men can be compared to women who can't bear children. Women were created to bear children as men were created to work hard and provide. Barren women grieve deeply and many become distraught. They want a baby to hold in their arms, the same way men want and need a job.

God commanded men to be providers, not women. It appears that it isn't simply because He decided for it to be this way but men NEED to work. They were created to work and provide. When we try to thwart God's purposes, everything begins to fall apart. When women were home full-time taking care of the home and children, society was a much better place. Children were being raised by their mothers, the schools had few discipline problems, marriages were stable, divorce was rare, crime was low, and most men had jobs.

Since women have left their homes, the complete opposite has happened and it has slowly destroyed our society. The saddest part is the destruction of marriages and studies have proven that men are happier when their wives don't work. "When you look at men's relationship satisfaction, it's at its highest when their wife is not in the workforce. Those traditional gender roles die hard...I guess all things being equal, men would prefer their wife at home and managing the household. The report proposed that a household income did not affect the happiness of the couples that were surveyed..." Therefore, it matters not how much your husband earns in order to be happy. I have seen couples where the man works hard to provide and doesn't make a lot of money, yet the wife stays home and takes good care of the children and home and the marriage is happy.

Go back to God's ways. He created us and knows what is best. Meditate upon these things; give thyself wholly to them; that thy profiting may appear to all. Take heed unto thyself, and unto the doctrine; continue in them: for in doing this thou shalt both save thyself, and them that hear thee {1 Timothy 4:15, 16}.
Picture is by Susan Rios