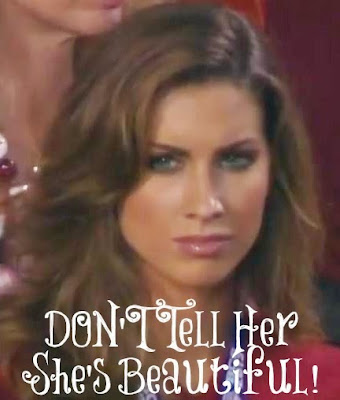 You'll get in trouble if you say she's beautiful! There was a big brouhaha awhile ago on the news about one of the dancing contestants on Dancing with the Stars {which I don't recommend watching} and one of the judges. After she was done dancing, apparently the judge said something like, "You're easy on the eyes." She is a beautiful woman. I could not figure out why this was such a BIG deal. Remember when that sportscaster noticed the girlfriend of one of the football players who was sitting in the stands and he made some remarks about how beautiful she was and got blasted for doing it? I couldn't understand that at all, either. I am reading a book and the author brings up the time President Obama made a remark about how good looking the attorney general was and the President had to apologize. WHAT is up with this? Men aren't allowed to comment on the beauty of a woman???

However, the author of this book I'm reading made this comment, "Noticing a woman's looks is sexist, as any good college-educated man knows." Oh, I get it now. Dennis Prager has commented that young adults go into Universities knowing there's a difference between male and female and graduate thinking that they are the same! Feminism has so blurred the lines of sexual identity that men are not supposed to  notice or say anything about a beautiful women because it will be seen as sexist. This is disgusting!

The one woman whom the judge told was easy on the eyes, should have responded by saying, "Thank you!" This used to be a compliment given to women. Instead, she had interviews about how offensive this was and it should not be tolerated. What woman doesn't want to be told she's beautiful? This is a crazy society we are living in.

Supposedly, there are no distinctions between the sexes anymore. Yay! This has helped society become such a better place! NOT! How anyone can believe this shows me that they must be blinded by the enemy of their souls. God was very clear when giving the roles for male and female. Society works beautifully when they are followed and falls apart when they are not. The only thing women seem they can't do, as of today, is play some of the sports like NFL football.

As believers who are called to be salt and light, we MUST live out our God-given roles and shine light upon the darkness. This is our responsibility! Love being a woman, women. Treasure your role as a wife and mother or a godly single woman who shines the light of Jesus. No earthly way can come close to God's marvelous ways. By the way, I also think the woman in the picture is beautiful!

But from the beginning of the creation
God made them male and female.
Mark 10:6