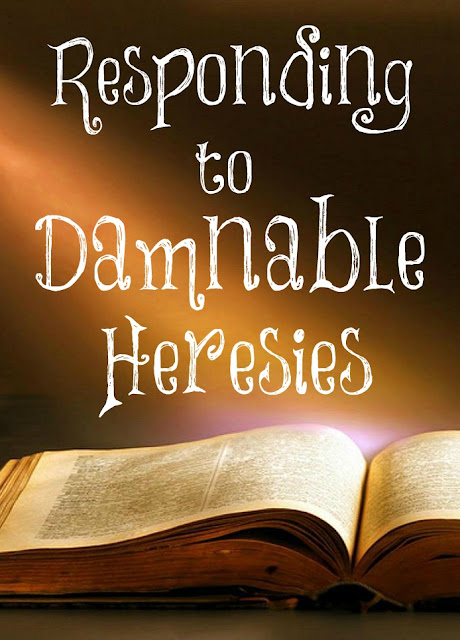 There is a lot of damnable heresies swirling around us these days. Just the other day, a statement was being shared on Facebook ~

Pastor: Now according to a few passages in the Bible, homosexuality is sin.
{Couple of older males in the audience: Amen!}

Pastor: Now wait. I'm not finished. You know what else the Bible defines as a sin? Divorce.

Pastor: There are countless passages that talk about how divorce is wrong and there are consequences to getting a divorce, such as the wife should be stoned. Yet, I have witnessed a divorce this morning. And I gotta tell you, it was heartbreaking, but I definitely didn't attempt to throw rocks at the wife, even though she was the one who filed for the divorce. We chose to overlook the consequences of divorce because time has proven that they're inhumane and cruel. The Bible doesn't say anything about the consequences of homosexual lifestyle. Yet, we seem to be spearheading the campaign to ruin the lives of people we don't even know. The Bible states to love thy neighbor. That's it. There are no other rules or restrictions to this passage. So, we as a church family have to support equality with a smile on our face. That is the true Christian way.

But there were false prophets also among the people, even as there shall be false teachers among you, who privily shall bring in damnable heresies, even denying the Lord that bought them, and bring upon themselves swift destruction {2 Peter 2:1}.

Now, if you don't know your Bible, you will not know whether the above statements by this Pastor are true or not. You MUST know your Bible, dear sisters in Christ, or the lies being promoted as Truth around you will deceive you and may cause you to lose your faith by swallowing the heresies of our society.

There are SO many things wrong with this pastor's words. First of all, He does NOT know the Bible at all!  Yes, homosexuality is sin. He did get that right, but not all divorce is sin. There is not one single passage that states a divorced woman should be stoned. Furthermore, any stoning commanded in the Bible is in the Law of the Old Testament which we are NO longer under. Jesus died on the cross and rose again so we died to the Law and rose to a brand New Covenant which the church today lives under. It is a Covenant of grace, love, mercy, and Truth!

Secondly, the Bible absolutely gives consequences to homosexuality. Flee fornication. Every sin that a man doeth is without the body; but he that committeth fornication sinneth against his own body {1 Corinthians 6:18}. It is right there, Pastor. {Apparently, he doesn't read or study his Bible.} We aren't "spearheading the campaign to ruin" others but to sound the alarm bells that they are ruining their own lives and they need Jesus. He alone can free them from their sin, make them new creatures in Christ and give them life eternal. This is NOT hate speech. It is LOVE speech. It is the love speech that those who are lost and trapped in their sin need to hear. We don't say it because we hate them but because we love them and God doesn't want ANY to perish but ALL to come to the saving knowledge of His precious Son.

Yes, the Bible absolutely commands that we love our neighbor but one of the best ways to love them is by speaking the Truth in love. How will they hear Truth unless Christians boldly proclaim it to them? We don't support equality with a smile. We don't want our neighbors and friends to be on a pathway to destruction. We want them to know Truth and to be saved from their sins.

If you see heresies being promoted on Facebook or anywhere else, be bold and lovingly present Truth to them. They won't be able to defend it so they will attack you but that is okay. We are not trying to win the argument. It was already won at the cross. We are only responsible for planting seeds by speaking Truth in love because if you don't, they may never hear it and others will be led them farther astray by the heresies being proclaimed as Truth. Now is NOT the time to put your light under a bushel but on a candlestick to shine the light to those living in darkness, for we are NOT the ones who are going to perish.