My Youngest In Engaged! 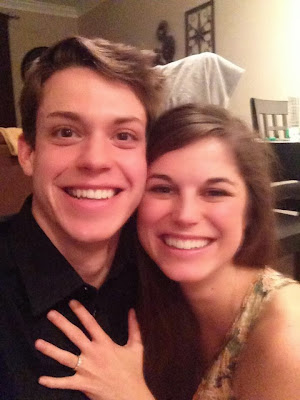 Cassi went to Houston to visit her brother, Steven, last February. Steven picked her up from the airport and drove her to his apartment.  His good friend, Ryan, was there to have dinner with them.  The moment they met, they liked each other and their feelings have not wavered since then.

Last Sunday, he planned a picnic for them.  Later, they played a game of Monopoly.  They both love playing games.  When she turned over one of the cards, she read,  "From the moment I met you..." and then proceeded to share the feelings he had about her, got down on his knees, presented a beautiful ring to her, and asked her to marry him.  No, they aren't into extravagant proposals.  They love each other and just want to be married.

A few days after she was engaged, I asked her if she was excited about marrying Ryan.  She quickly responded, "The Lord is in this.  I haven't been more sure of something my entire life.  I seriously love him so much and feel so blessed to be able to spend the rest of of my life with him.  It seems surreal that I'm engaged...but then I see the ring on my finger."

Yesterday morning, she sent me an email telling me she had just listened to a great sermon about submission in marriage.  They want to do it right.  Ryan wants to be a godly leader and Cassi wants to be his help meet.  She has been trained well.  She reads my blog all the time and knows exactly what God requires of her.

They are planning a wedding for the end of January or beginning of February.  My baby is getting married!  She has always loved Jesus and walked with Him.  She believes God has led her to the perfect man for her to call "husband."  So we will be very busy the next few months planning a wedding.  Congratulations, Ryan and Cassi!

Therefore a man shall leave his father
and his mother and hold fast to his wife,
and they shall become one flesh.
Genesis 2:24