Trusting God Instead Of Emotions 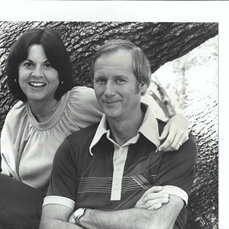 Ken lost his mother to cancer when he was 19 years old.  When I went home to meet his family, his father was remarried to Barbara.  I asked her to share her wonderful love story with you and she willingly obliged!

Happily single at age 29, I was loving my life as a first grade teacher in a Christian school.  Raised in a Christ-centered, missions-loving  home, and saved at age 5, I had been heading toward the mission field myself until God told me to stay Stateside.  I found joy in spending my summers, at my own expense, helping out missionaries I knew.

However, facing turning 30, I refused to view that as most Americans did, as in being over the hill.  So the Lord gave me this thought: when Jesus was 30, His real ministry began; up until that time He was in preparation for it.  Great idea!  But after awhile I got to asking: "God, is there something to this?   Is something going to happen when I turn 30?"  No answer.  But I kept on anticipating my future after 30.

Summer of 1978 found me on a missions trip to Ecuador, where I celebrated my 30th in the jungle, fasting, praying, "Lord, I don't know what You're up to with this turning-30-thing, but whatever You have for me out there, I dedicate myself to it."  Before leaving Ecuador, God spoke to me through a sermon on spiritual warfare, and I felt myself pulled towards becoming involved in that kind of battle.

Home again in Miami, I was looking for a new church, closer to my home.  Felt God's tap on my shoulder saying "This is it" when in a church I visited, the pastor announced the next series of messages to be on spiritual warfare.   In September of '78, 2 friends from the church invited me to attend a small group which was lead by an elder named Harold Alexander.  {I had actually heard of him before from my former roommate who worked at the mission where Harold was a leader.}  Harold would chat with me after house church, and I figured he was checking me out as a possible applicant for church membership.  Fat chance!

No, from his side, he'd lost his first wife of 23 years in March of '77, and  in spring of '78 was encouraged by his colleagues to remarry.  He asked the Lord about and He said, "OK"; Harold replied "I'm too old {47} to go looking, You'll have to bring her to me."  Voila!  Barb shows up at church, impresses Harold with her credentials, and the rest, as they say, is history.

Harold asked me out for dinner, and the night he asked me I got 3 hours' sleep, and the next day had diarrhea - sure signs of true anxiety!  BUT as I look back, my spirit knew THIS was the "turning-30-thing" God had in mind, this was the real thing, I was going to marry this man!  On our second date he told me his side of things and asked me if I was willing to date him to see if I was to be the woman God had for him.  What else could I say?  It was predestined.  We held hands across the front seat of his car.  I did not yet love him. We agreed to set our emotions aside in order to determine God's will.

We had 5 dates in 3 1/2 weeks.  He knew all the time that I was the one.  I was scared: he's now 48, I'm 30, he has 5 nearly-grown kids.  But God said to me: "100 years form now you will be dead and gone.  What will really matter was did I get the most out of your life?"  I said, "OK, God, if You can get more out of my life marrying Harold Alexander than staying single and teaching at Miami Christian School, then that's what I want."  Peace.  Relief.  But still not sleeping well, and lost 5 pounds through it all.

On the fifth date, he knew I was ready for the proposal.  {I like everything spelled out in black and white, I wanted to get this thing settled.  He could tell.}  I don't recall what he said, but my exact words were:  "Yes, I will marry you, I'll be happy to be your wife."  I knew that if I followed God's will, He would give me whatever I needed to do His will.  So He would give me what I needed to be a good wife for Harold.  I did not love him when he proposed.  Five days later, I fell in love with him.  But I needed that assurance before the emotion, because the going was not going to be easy as a second wife.  I could always look back and know that we discerned God's will without emotions clouding it all.  At each tough time that followed, I could say to God, "Father, You got me into this; You're going to get me through it."  And He has.

We married in March of '79, making a big to-do of it all, big wedding and all.  His kids had different responses to me, but I knew it would just take time basically.  And God gave me what I needed, because He promises to do that when we seek Him first.

But seek ye first the kingdom of God, and his righteousness;
and all these things shall be added unto you.
Matthew 6:33