Who Owns The Knives? 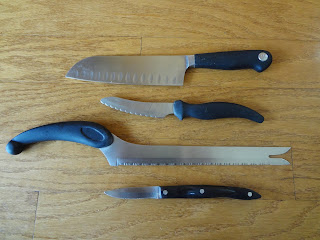 My mother-in-law, Barb, lives in  Villers-St.-Paul, France.  She is a wealth of wisdom.  I have asked her to share some of her pearls of wisdom with you.  Here is her first one ~


This morning our doorbell rang, and Harold answered it.  It was a man in need of work, sharpening knives and scissors and garden tools, among other things.  Harold took pity on him needing work and asked me to round up things we had that could use sharpening.  I did so, collecting two garden snippers, two knives {one of them being, of course, my favorite}, and several pairs of scissors {one pair was my sewing scissors, given to me by a friend who had helped me in my classroom when I taught first grade back when I was in my twenties}.

I watched the man, who seemed to be nice {he spoke French with an accent, and so fast that I didn't really understand much}, as he walked away down the street with my possessions in hand.  As he disappeared out of sight, I began to wonder if he would return; after all, what market value did used tools like that have?

I began fearing that he would never come back, and that my favorite knife and scissors were gone forever.  I made myself busy housecleaning to distract me from the nervousness I'd begun experiencing, all the time thinking I'd said good-bye to my things.  When I expressed my fears to my husband, he said these things were replaceable; he had wanted to take pity and be generous with a man in need.

I kept watching the clock as it moved minutes and more minutes past the time the man had estimated for the job.  I knew it was wrong of me to let this get to me.  Then the Lord said to me, "If you're hanging on to them, you haven't given them to Me."  And I said,  "Yes, Lord, it's wrong of me.  They are just replaceable possessions.  I give them to You."  And I did.

A few minutes later the man came back with everything.  The knives and clippers and scissors are all put away now, where I can easily get to them when I need them.

But they still belong to God.

And He still speaks to me in that still, small voice: "100 years from now you will be dead and gone, and it will not matter.  The only thing that will matter is: did I {God} get the most out of your life that I could?"   I answered: "Take it all, Lord: knives, scissors, health...take it all.  Use it for what REALLY matters."  {I had just seen the movie Evening, which had this quote: "at the end, so much of it turns out not to matter..."}  And that's SO true.  Only His ways and purposes matter.

Be careful for nothing; but in every thing by prayer and supplication with thanksgiving let your requests be made known unto God.  And the peace of God, which passeth all understanding, shall keep your hearts and minds through Christ Jesus.
Philippians 4:6,7