Forgiving The Woman Who Stole Her Husband 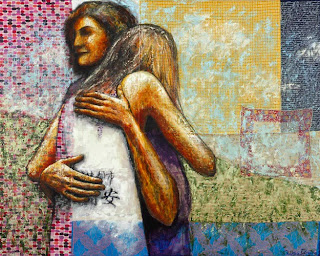 Her husband was a pastor.  The other man was the music director at another church.  They were Mary and Joseph in a play.  Her marriage was not good.  Her pastor husband didn't live up to her expectations and she was unhappy.  During the course of rehearsing for the play, she began to have feelings for the other man.  When the play was over, the other man told her he was attracted to her.

Thus, began a trail of lies, adultery, and destruction.  After a two and a half year affair, they told their spouses and began the path to divorce.  Two marriages destroyed.  Many lives deeply injured.  Two churches scarred.  When people decide to live a lie, many lives are damaged in the process.

They ended up marrying each other.  Guilt assaulted her.  She slowly went to every person she had hurt and asked for forgiveness.  She knew she was wrong, renewed her relationship with the Lord, and went about restoring relationships.

She finally felt she needed to ask her new husband's ex-wife for forgiveness.  She wrote a note telling her how wrong she had been and how selfish she had been.  Within two days, the ex-wife wrote her this note ~

Jacque,
Words cannot describe how touched I was by your card. I can’t imagine the courage it must have taken to put such feelings on paper and send them to me. I want you to know I have completely forgiven you and Thad for what happened. I believe that God has complete healing and peace for you. I know He was smiling on you as you wrote to me and that each step you take towards restoration, He honors and will give you what you need.

More than anything, I know that God loves you so much. Any forgiveness you seek, any feelings of guilt or shame or regret was covered on the day Jesus died on the cross. He paid for them and you are released from their power! Rest in that. Know too, that I am alright. I have been on my own journey towards restoration and healing. God is showing me that He is faithful and that He loves us more than we could ever imagine. His love absolves all pain.

Jacque, I believe God has big plans for your life. I believe He wants to use you and Thad in ways that are unique to your gifting. Don’t be afraid to step out in faith and let Him use you again. I have been praying that God would continue to heal you and that you would begin to sense His immense blessings in your lives. If we should ever meet again, know that I will welcome you with open arms. I love you,  Kim

Wow! This is one incredibly godly and wise woman.  She knows the power of forgiveness and understands what Jesus did on the cross for her.  No one is beyond forgiving them when we think of what Jesus has forgiven us for.  His pain and suffering paid it ALL, no matter how ugly our sin.

Then Peter came up and said to him,
“Lord, how often will my brother sin against me,
and I forgive him? As many as seven times?”
Jesus said to him,
“I do not say to you seven times, but seventy times seven.
Matthew  18:21,22