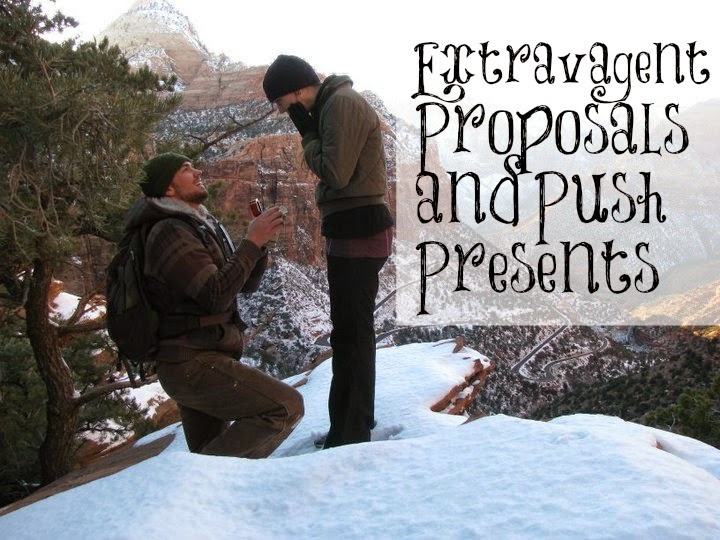 Have you ever heard about push presents?  I never have until I read Sunshine Mary's post about it.  I guess husbands are suppose to give their wives very nice gifts after childbirth.  She also wrote about extravagant proposals and how high women's expectations have become for these.

Ken proposed to me one night while we were cuddling and asked me if I would like to become Mrs. Alexander.  I said, "Yes" and that was it.  We shopped for a ring a month later.  He never gave me any gifts after four long, difficult childbirths.  Was I short-changed?

No, I don't think so.  I had no expectations for an amazing proposal or for any gifts after childbirth.  He has been faithful to me for almost 33 years.  He works hard and provides well for the children and me.  He taught my children well and they all walk with Jesus.  He is everything I wanted in a husband and a father.

Jon asked Alyssa, my daughter, to marry him on a snowy mountain top.  Ryan, my son, asked Erin on December 31st during the fireworks.  I think Jon's family had a small celebration for them when they climbed down the mountain.  Erin's parents had a bottle of champagne waiting for them when they got home but traffic was so bad getting out of San Francisco that they were too late.  I think maybe her mom stayed up to congratulate them.

Alyssa and Erin didn't expect extravagant proposals.  They were certainly nice proposals but not extravagant.  Their husbands love them, work hard, and they both have happy marriages.  Ryan didn't give Erin any push presents after she delivered two children but Ryan sure is a fabulous father to them.

Too many women expect too much today.  Determine to work much harder on being an amazing wife, becoming the godly woman God wants you to become, and don't have any expectations because expectations kill relationships.

Let your conversation be without covetousness;
and be content with such things as ye have:
for he hath said, I will never leave thee, nor forsake thee.
Hebrews 13:5