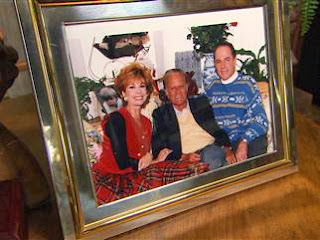 At the age of 12, Kathie Lee had a choice to make.  Would she follow the world's way or God's way?  She chose God's way and her life has never been the same.

She talked frequently of her marriage to Frank Gifford.  She loves him and being married to him.  The Globe, a tabloid newspaper, helped Frank fall into an affair.  Yes, he initiated it but they paid his mistress to set him up so they could take pictures of the two, splash it all over the tabloids, and make a mockery of Kathie Lee's marriage and her goody two shoe image.

But God..."When I went through very, very tough times when I was accused of awful things, the first phone call I got was from Billy Graham," she said.  "When my husband was unfaithful to me, and it was a terrible time, you know who Billy called first:  Frank.  He called Frank first.  Then I got on the line.  He wanted to talk to both of us.  He knew that healing had to be from both of us."  Satan thought he won but God won because they were both willing to listen to wise counsel and mend their marriage."

I have always enjoyed watching Kathie Lee.  I watched her when she was on Regis And Kathie Lee and now I watch her on Hoda And Kathie Lee.  She is not ashamed of the gospel of Christ.  She often shares what she has learned in her devotions that morning.  She frequently interviews people of faith who share amazing stories of redemption.  She loves her husband.  She loves her children.  She loves what is pure, good, and holy.  She is an amazing testimony of God's faithfulness.  Yesterday, on the Today Show, she proudly told of the moment she received Jesus into her heart because of Billy Graham's preaching.

I love goodness.  I love holiness.  I love watching people who walk with Jesus live godly lives for all the world to see even a during their broken times.  Kathie Lee shared with us a person who has been inspirational in her life.  She shared Billy Graham.  You can watch it HERE.  It is well worth the time.

Billy Graham and Kathie Lee live lives for God boldly and unashamedly.  May we all follow their example and do the same.

For I am not ashamed of the gospel of Christ:
for it is the power of God unto salvation to
every one that believeth; to the Jew first, and also to the Greek.
Romans 1:16