Living Through the Storms of Life 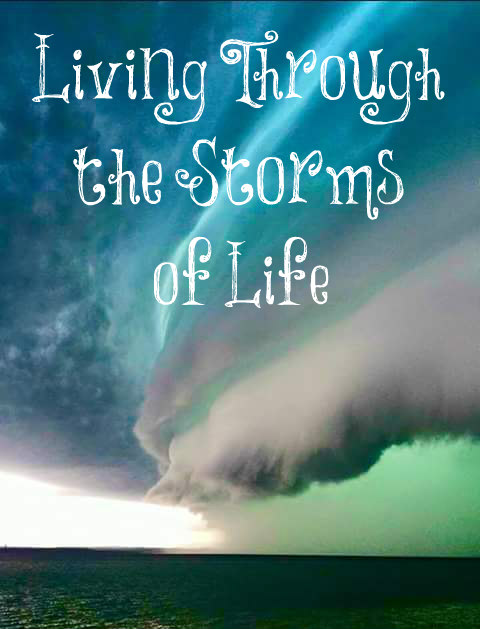 We were in Door County, Wisconsin for two incredible weeks. The weather was perfect: a southwest wind, bright, sunshine and around 80 degrees. The day we left, however, was dramatically different. Ken was the driver in the van; Steven, Emily, Cassi and Ryan were also in the van. We left around 2:00 pm for a one hour and forty five minute drive to the airport. Minutes after we left, it began pouring. Five miles down the road, a gigantic tree had fallen over and completely blocked the road. We had to weave all over Door County because of fallen trees and praying a tree wouldn't fall on us or a tornado wouldn't strike.

The wind was howling; there were torrential downpours and consistent thunder and lightening. At one time, we had to take cover under a freeway pass with other cars to find protection from the hail. Often, Ken would slow way down because it was so hard to see out of the windshield due to the pounding rain and hail. It was the scariest car ride any of us had ever taken and two of the passengers were from Texas which is known for bad storms.

Of course, we missed our connection in Chicago to San Diego. We tried taking another flight to Orange County and were the first two on the standby list because of Ken's flight status but didn't make it. We tried another flight to Los Angeles and were the first two on standby but didn't make that one either. We were finally booked on an 11:30 pm flight to Los Angeles. We boarded the jumbo jet which took a while. As we were settling down for the long, late flight to LA, the pilot informed us of another storm coming so we'd have to get off the plane and wait another hour and a half.

The storm was fierce. For an hour, it thundered and there was almost constant lightening. Even inside the big Chicago O'Hare airport, it was easy to hear the rumbling. We finally boarded and made our way to Los Angeles. My 84 year old Dad picked us up at 3:00 am and Ken drove the van home. We walked in our home around 5:00 am. This turned out to be a 13 hour trip!

Fifteen days earlier, our trip to Door County took 12 hours due to bad weather, cancelled flights, having to land in an airport that wasn't Green Bay, taking an taxi to Green Bay, and driving the two hours to my parent's cabin. Life doesn't always go as planned!

How do we handle life when unexpected things like this happen? Should we grumble and complain or should we trust God is in control of even the details? I chose to trust God knowing He is in control, even when sitting in a car with a storm raging all around me. As we trust God through the storms of life, our faith and trust in Him grows. Just as we were safe in the van driving down to the airport, those in the ark were safe from the storm.

And when he got into the boat, his disciples followed him. And behold, there arose a great storm on the sea, so that the boat was being swamped by the waves; but he was asleep. And they went and woke him, saying, “Save us, Lord; we are perishing.” And he said to them, “Why are you afraid, O you of little faith?” Then he rose and rebuked the winds and the sea, and there was a great calm. And the men marveled, saying, “What sort of man is this, that even winds and sea obey him?”
Matthew 8:23-27

***The picture was taken by someone who was experiencing the same storm we were in! One of the women from the chat room shared it!