Should Anna Separate from Josh? 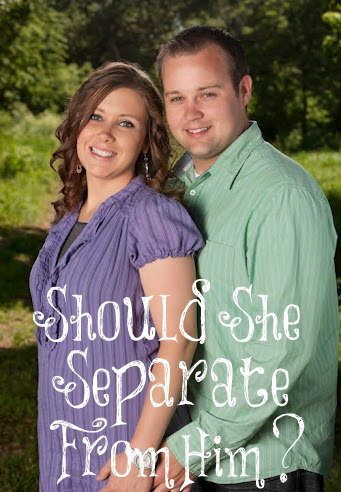 Women have been asking what my advice to Anna would be concerning separation if I were mentoring her. I have mentored women in similar situations but I will begin with quoting several verses about this topic first since I try to give biblical counsel and not my own.

Therefore, I would encourage not separating from Joshua since while she is living in the home with him, Jesus is living in this home and he is being sanctified by her, as the verse states. If she separated, her children would visit Joshua where Jesus may not be and this is never good. We don't know whether or not Joshua is truly a believer but his actions say he is not and he needs to have a heart transformation by Jesus. Even if he is a believer, he has been living in sin and the fruit of his life isn't consistent with how a true believer should live.

If she separated from him, he would probably live on his own and would be left to his own devices which is a bad idea. If she loves Joshua, which I believe she does, she wants more than anything for him to walk in the Spirit and to have saving faith in Jesus. There's nothing more powerful than a transformed life in convicting others. Yes, he's probably seen this in her life ever since he married her, but there will likely be a lot more accountability in his life from now on since he's proven he can't be trusted.

I would hope that godly men will surround him, hold him accountable and speak Truth into him. I pray godly women are surrounding Anna with encouragement, support and helping her in any way she needs help. This family is going to need a lot of prayer and support from the family of God and I am sure they are getting it.

Paul rebuked the church in Corinth because there was a man attending their church who was having sexual relations with his stepmother {1 Corinthians 5} and warned them that a little leaven leavens the whole lump. The church then kicked him out and he became repentant. Then in 2 Corinthians, Paul exhorts the church to bring him back into the fold so that on the contrary you should rather forgive and comfort him, otherwise such a one might be overwhelmed by excessive sorrow. Wherefore I urge you to reaffirm your love for him {2 Corinthians 2:7, 8}. If a church can forgive a man who had sex with his stepmother, a church can forgive Josh. Also, since we are commanded to forgive a repentant brother 70 X 7 times, surely a wife is supposed to forgive a repentant husband who she is one flesh with this many times .

Many will cry "Divorce" since he cheated on her and Jesus said it is okay to divorce if there's adultery. No, He did not. He said that Moses allowed it due to the hardness of the people's heart. He answered and said, "Have you not read that He who created them from the beginning made them male and female, and said, 'For this reason a man shall leave his father and mother and be joined to his wife, and the two shall become one flesh’? So they are no longer two, but one flesh. What therefore God has joined together let no man separate. Because of your hardness of heart Moses permitted you to divorce your wives; but from the beginning it has not been this way. And I say to you, whoever divorces his wife, except for immorality, and marries another woman commits adultery" {Matthew 19}. He's not telling anyone to divorce in these verses. No New Testament writer wrote that divorce is the right thing to do; that it was good or acceptable. Jesus was just saying that if the unfaithful man or woman divorces their spouse due to the hardness of their heart and the faithful spouse then remarries, the faithful spouse is not committing adultery. He is certainly NOT promoting divorce; quite the contrary!

The whole book of Hosea is about a man who marries a prostitute who continues to be unfaithful to Hosea, yet he remains faithful to her; illustrating the fact that God remains faithful to us when we are unfaithful. God hates divorce. Two wrongs never equal a right. Their children will suffer much more if their parents get divorced than if they stay together and work it out. We must all pray that Joshua will repent and stay faithful to God and Anna until the day he dies. This is what we, as the family of God, are called to do; to pray for complete healing and restoration of this family. God is in the business of transforming hearts and bringing beauty out of ashes.

Our life down here is about our faith in God and believing unto the end. It's not about our happiness, our success or anything else. God uses us when we are weak, broken and fragile to test our faith and see if we will believe Him and His many promises to us in spite of our pain and suffering. As we cling to Him by faith throughout our lives and do the hard, obedient and difficult thing, He is glorified. For faith is believing those things which are unseen but we know, without a shadow of a doubt, that He keeps every single one of His promises to us. We are nothing without Him.

Thank you Jesus. We are humbled as we stand in awe of your majesty.
Help us to endure until the end.

But without faith it is impossible to please him:
for he that cometh to God must believe that he is,
and that he is a rewarder of them that diligently seek him.
Hebrews 11:6