Plant Seeds of Truth in Those Living in Sin 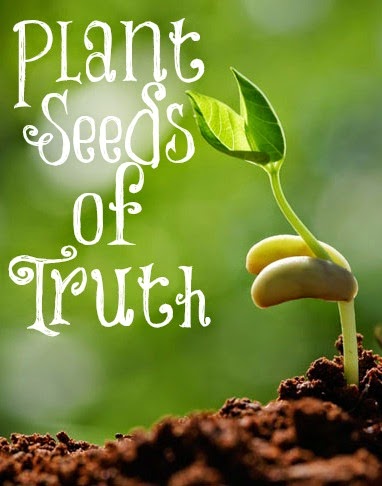 If people are living in sin, should we point out their sin or should we just love them? Many just think that by loving others, they will come to know Jesus. Are we called to simply love others no matter what they are doing? Are we judging others if we tell them that what they are doing is sin? We need to love all of those God puts in our path since the only way people will listen to what we say is if they feel loved by us BUT we need to point out their sin, also. Unbelievers don't think they need a Savior unless they recognize their sin, admit it and see their need to be delivered from their sin by the same power that raised Christ from the grave.

However, the most important Truth you need to give those living in sin is the Gospel. It is, by far, the most powerful tool for convicting others of their need for repentance. Preach Jesus, His life, His miracles, His death, but mostly His resurrection and conquering death. Explain that He lived a sinless life and paid the penalty for every sin ever committed for all of those who call upon His name. Many times, this is all they need to hear to be convicted of their sin.

In 1 Corinthians, Paul is speaking to a messed up church. They are in desperate need of Truth. In the fourteenth chapter, he is teaching them about speaking in tongues and let's them clearly know that teaching Truth that others can understand is WAY more important than speaking in tongues. "But if all prophesy {reveal the Word of God}, and an unbeliever or outsider enters, he is convicted by all, he is called to account by all, the secrets of his heart are disclosed, and so, falling on his face, he will worship God and declare that God is really among you." People won't come to understand Truth and what Christ accomplished on the cross unless Christians are willing to preach Christ and Him crucified. Yes, love them deeply in the process but always speak Truth in love, including God's hatred of sin.

Our society is all about tolerance as long as you don't speak God's Truth. So many say that "morality can't be legislated." I have heard this phrase over and over again. Of course it can! If it could not, we wouldn't be able to legislate murder, theft, child pornography, etc. Those who repeat this phrase are simply saying it to allow all people to be as sexually immoral as they want.

It used to be that everyone knew it was wrong to sleep with someone before marriage. Now it is completely accepted! There used to be a sense of guilt when a couple had sex outside of marriage, now it is celebrated. This is the way it is with many sexual sins now and we are just suppose to sit around and say NOTHING??? No! Speak the Truth in love. It is NOT judging someone to let them know that what they are doing is wrong. You wouldn't feel bad saying this to a murderer or thief, why should it be any different with any other sin?

Jesus told the woman at the well who had slept with many men to go and "sin no more." Paul commands the same thing to the church in Corinth, "Awake to righteousness and sin not" {1 Corinthians 15:34}.We are also commanded to have no fellowship with the unfruitful works of darkness, but rather reprove them {Ephesians 5:11}. We should not be entertained by what those living in sin are doing but expose their sin and even call it sin. And no, exposing sin isn't judging others, it's speaking Truth and life into their lives. The Bible never teaches us to love the sinner but never speak of their sin to them!

God takes sin VERY seriously and so should we. Mass destruction is in store for all those who do not repent of their deeds and call upon the name of the Lord. So what if you offend some? Who cares? Isn't there eternal soul worth more than offending them? If they won't listen, at least you have planted seeds of Gospel Truth and this is all that you are responsible for. Oh, and by the way, no one will be happier by living in sin. Never.