With Every Baby God Sends a Loaf of Bread 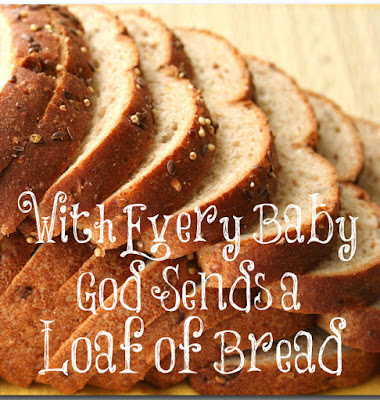 This grandma says, "Bravo! And if I may say something about waiting for children; my experience is that, in hindsight, one should be open to children always because there may never be a 'later.' One of you may become ill, or you may not have a long fertility window in your physical make-up, or a million other reasons. Getting pregnant is more difficult with each passing year. That is best done on God's schedule. And don't ever let money worries stop you from having children. There is an old saying 'with every baby God sends a loaf of bread.'"

This was a comment on Danielle’s post, "Are We Accepting Society's Norm?" which is a great post, by the way. I love this grandma’s comment! If we would not have waited, we probably would have another child since soon after I had Cassi, I became very ill and could not have any more children. Our children are, BY FAR, our greatest joy in life! Ryan, my oldest son, and his wife, Erin, just had their third baby. The baby was sleeping on my chest the other day; there is nothing more precious than the smell and feel of a newborn baby! It was touching watching Erin holding her baby and not being able to take her eyes off of her; it never gets old! Then baking cookies with my other two grandchildren was a joy beyond comparison as the two year old kept saying to me, "You're so funny!" I admit that this is NOT something said often about me!

For all of you women who can’t have children, I know you mourn deeply. God is with you in your pain and we can trust Him in His providence over our lives. One of the many tragedies about abortion is that for all of the infertile couples, those aborted babies would have been happily adopted by these couples. Instead of being adopted into good homes, they are brutally murdered and women who desire a baby grieve.

For all of you who can have children, stop listening to what society and even your family say is best for you. Listen to what God says are blessings from Him! He created marriage for families. He wants godly couples to raise godly offspring. Every single baby is formed in the womb by Him.

Many worry about the expense. If you nurse your baby for a long time, use cloth diapers and don’t buy them all the latest gadgets, they are not expensive to raise. This is an area where we MUST trust God for He is our Creator and Sustainer. Even homeschooling can be inexpensive. Use the library to check out good books for your children to read and have them read a lot and do math. All other subjects will come easy to them if they are good readers and know math. Live simply and train them to be content with what they have. What they want most is a home with a mother and father who love them and each other.

On a news program, they showed a video of a little boy going off for his first day of kindergarten. Someone asked him if he’d miss his mom and he said, “No.” However, after thinking about it for a few seconds, he began bawling his eyes out. I don’t think children should be separated from their mother for hours every day. Yes, my children went to public school when they were young but as I have grown older, I don’t see the wisdom in this. On this same program, they were also discussing the stress children are under in the fall when they have to go back to school with the bullying and competition that takes place in every single school.

Now that schools have departed so far from our values and teach things contrary to them, it makes no sense to send our children to public school all day, all week long for many years. God gave these children to us to raise in the nurture and the admonition of Him, not strangers whom many know not Him.

When I asked the women in the chat room why they homeschool, Melissa from Far Above Rubies responded, "We do homeschool, and I have lately had in my heart another reason why. It goes back to how Jesus was tempted. Satan said {and I paraphrase}, 'Throw yourself down from here...He will save you.' Jesus replied, 'Thou shalt not test the Lord thy God.' I have heard the Lord saying to me that one reason He wants us to homeschool is because we may believe He can save us from a corrupt world, and He sure can but that we are not to test Him with the hearts and souls of our children. We know the commands of God about teaching and training our children are to PARENTS, not to anyone else. And it would be testing Him to 'throw them down' to wolves in any environment. That is our conviction, and a very deep word to me from the Lord that I have not shared with anyone before."

Here are some wise words to ponder. Instead of listening to what the world is telling you, listen to the Savior of your soul. If God sends you the blessings of children, trust Him to help you to provide for them and raise them up to become God-fearing adults.

But my God shall supply all your need according
to his riches in glory by Christ Jesus.
Philippians 4:19