Love Is In The Air ~ A Romantic Proposal 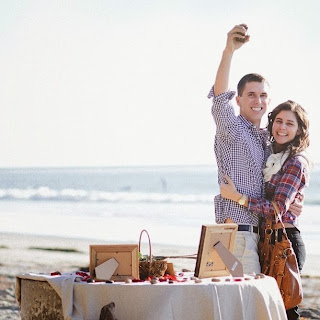 God always had someone special picked out just for Gregory {my sister's son}, I knew it!  He was born a year after I had Ryan and a year before Steven, right in between my two sons.  The three of them were great buddies growing up. They loved each other and had so much fun together.

Gregory has grown up to be an amazing young man.  He has always walked with Jesus, worked hard, and loved his family.  A lot of girls liked him but he was waiting for that special someone and he finally found her!  They met in his last year of dental school.  I asked Maria, his fiance, to share their love story with you.  She is absolutely precious and God is going to be glorified in their lives together.  Here is her story ~

Everyday I am reminded how special my relationship with Gregory is. Everyday I am astounded by the blessing God has given me. Both of our family and friends can attest to this; whenever we would go on dates with other people, it just never felt right. But from our first date with each other, we both knew this was different. After about 5 months, we told each other “I love you."  It almost felt like he had proposed that day because we both knew we don’t throw around those words. We both knew saying those words meant we wanted to marry each other. Ever since then, I fall more in love with him every single day.

Gregory is in Oklahoma and I am in Loma Linda, CA so we don't get to see each other often.  In the beginning of November, Ali {Gregory's sister} mentioned she was going to be down in San Diego with her new boyfriend, David. Well, I just couldn't wait to meet this guy, so we planned it out so I would go to San Diego the last weekend of November. This was all in Gregory’s plan, he wanted the idea to go to San Diego to be mine, and it basically was!

I arrived at “Casa de Wright” ready to grill Ali’s new boyfriend, David, since Greg couldn’t be there {he had convinced me he couldn’t get ‘leave time’ from the army} and then we all decided we were going to go to a local restaurant. As we were driving, the Wrights decided it would be a good idea to stop by the beach to show David. I had literally no idea what was really happening.

This whole time I was talking to Alisa {Gregory's mom} about the denture project I had completed in school. We reached the top of the staircase at the beach and I was handed a letter from Gregory. I opened it and it said how our one year anniversary was coming up in a couple weeks and he wanted to start giving me gifts along the way. He then told me to walk to bottom of the stairs and wait for a call.

Still to this point I had no idea because Gregory will send me letters from time to time. At the bottom of the staircase, I found a trail of rose pedal. But, you see the great rule follower that I am, I didn’t know if I should follow them because Gregory’s letter said to wait for a call. I looked up to his parents with a confused look, and asked if I should follow the pedals? They quickly nodded yes.

As I followed the rose pedals, I saw a table at the end decorated with pictures and more roses. At this point I knew something was happening but I still did not see Gregory. As I got closer to the table, Gregory popped out from the bushes. I was shocked, not just because he might be proposing but because he was here!! I was so happy to see him.

Gregory then began to tell me why he loves me, why I am the one, and asked me to marry him. I said, "YES!!!" We were both so excited we started hugging for a few minutes and then realized “oops, forgot to put on the ring!”  After that, we looked up at the stairs to see Gregory’s family; it was such a joy to have them there and celebrate together!

That night we went back to “Casa de Wright” to have dinner. Steve {a family friend} asked Greg and me what we thought each other’s spiritual gift was, what is the best physical attribute of the other, and what we admire intellectually in the other. I loved answering all of those questions about Gregory because I love sharing some of the many reasons why I love him. This evening was filled with laughter, joy and just real deep conversation.

I found him whom my soul loves.
Song of Solomon 3:4