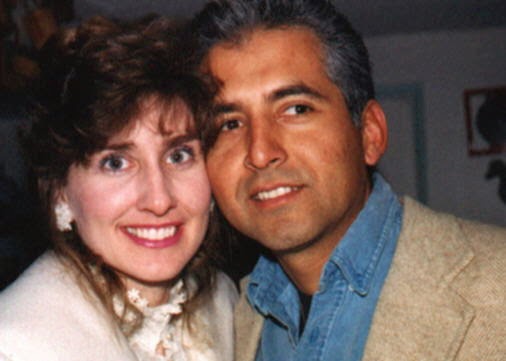 This was one of my very favorite mentor's testimony about how she went from a soap opera, dissatisfied, and unhappy wife and mother to one that rejoices daily in her God-given ministry to her family. This letter was written
January 4, 2002 ~

When I was pregnant between Abbie and Gabe, I lost a baby at five months of pregnancy. It was so hard for me because I was very sick with that baby and in bed much of the time. The fact of the matter was, I was becoming depressed and feeling God was not listening to me as I cried out in sickness. Then it got worse...my baby died inside of me without my knowledge of it for awhile.

I was His child, but I was spending more time reading rough romance novels, and watching soap operas and movies that I should not have. These were the words I was meditating on all day. I was spending no time in His Word except for opening my Bible in church on Sunday morning.

I was a fearful woman who put her children first in her life. Most of my fears concerned them. In my fear, I was critical and frustrated which caused me to yell at them a lot. My husband didn't know what to make of me and just tried to cope. We often had heated discussions. I felt as though everyone was sucking off me, and the were sucking me dry...

I got pregnant two months later with Gabe. Oh, I was so excited. He was born five weeks early, but there was serious trouble two weeks later. Before I knew it he had developed pneumonia and was in  an oxygen tent in the hospital fighting to breathe and stay alive. The nurse who was assigned to us told us he couldn't keep up the striving to breathe as he was only four pounds and that his heart would give out. She was sorry but she was so swamped with patients and would we call out to her when the heart monitor went off to signal his heart had stopped so that she could rush in to tend to him.

Well, I cried out to God as never before in that hospital room. He had taken a baby from me already and was not ready to take one I had seen and held. I had been a Christian since I was ten, but I did not feel His peace at all. I didn't feel it because I did not know my Father. I didn't trust Him in this situation whatsoever. So I started to bargain with Him. I promised Him I would get up early every morning and get to know Him if He would heal my Gabe. The heart monitor went off signaling Gabe's heart had stopped, and I rose to yell for the nurse at my husband's cry. I pleaded with God as I began to yell for the nurse. Gabe's heart started to beat again.

My husband had been encouraging me to write a book on saving money on food as I had a knack with that and had spoken to many women about it. The heart monitor went off again with a penetrating long and loud buzz that sliced into the room. I rose again to yell for the nurse at my husband's cry. {My husband just kept staring at Gabe in the oxygen tent praying for him to live.} I made a second promise. I promised the Lord I would write for Him to women if He would heal Gabe. The heart monitor stopped blaring and Gabe's heart started to beat again. Soon the room was a mass of confusion as they prepared to rush Gabe by ambulance to San Diego Children's hospital. One week later, the head doctor of the critical care ward came in and told me that they had no reason why this baby was well. But they were sending him home. I was so far from God that I did not give Him the praise and the glory He deserved to that team of doctors. I stood there silent, but thankful to have Gabe back.

Once I got home, I knew I had to do what I had promised. So I started to get up at 4:00 a.m., as this was the only time of my day that I could be alone, and I opened the Bible to the beginning: Genesis. I asked Him to show me Who He was, and not as I perceived Him to be, as I did not know Him as I should. And I asked Him to help me love Him with all my heart, soul, and mind, and strength. It was very hard for me to get up at 4:00 a.m. with a nursing baby, three other children, and home schooling. And I always started to read the Bible before, but found it to be too time consuming and difficult to continue. But I feared God! So morning after morning I got up to be alone with Him. Soon I was growing and finding out who God was! And how much He loved me! I couldn't wait to get up and get into His Word, and many times would get up at 3:30 a.m. to linger longer with Him.

That was five years ago this November, and my whole life has been turned upside down with the joy and love and adoration that our great Heavenly Father brings to me, one of His Chosen homemakers. I have more energy than I did before when I was sleeping longer. He multiplies my time. {I liken this to tithing as it seems you can never afford to tithe, and then after you start tithing, you can never afford to stop. Likewise when you "tithe your time" to Him giving Him the first of your day daily.}

And this summer I have had the privilege of almost seeing completion of the book that I promised to Him almost five years ago. The Proverbs 31 Bible study is the beginning of that book as I have a passion to help homemakers as God has so wonderfully seen to help me. It was good that I was afflicted. I no longer read rough romance novels, watch soap operas, or movies that I shouldn't see. He slowly pulled each one of those out of my hands. I no longer put my children first, but can see His plan for the family and try to walk in the Light of His Word on it. I no longer fear, feel frustrated daily, and yell at those that I love the most. I ask that I walk at His Pace, doing His Priorities, by His Power, with His Peace, and with much Praise to Him along the way. I ask that I might cling, cling, cling to Him and that I never return to the state I was in before. Because I know that it is only through the power of His Holy Spirit that I have anything with you to share.

And each morning I get up so excited to see what He will say to me in His beautiful, beautiful Word. And then I have pleasure of conversing with Him as He speaks tome. Intimate conversation in a holy kitchen. I can handle other's words now so much better in my day because I have heard The Word first. {My husband told me today that as I share with other women, he can see early morning lights on in kitchens all across America. It gave me goose bumps when he said that as I know the strength a homemaker has who is sold out for God and clinging to Him.}

My husband gets up next when I am 3/4's of the way through my Bible reading, and I have never looked at him with more love than I do now. God has given me new eyes to see him. He sits next to me and reads His Bible, which he never did before. My children get up after he leaves for work, and I cannot believe the change my behavior has had on them. My eldest son says the change in me caused him to start to read his Bible through every day for a year. And the, "my servants" get up and get going, which has had the most profound effect on my outlook concerning the running of my home. It was on the umpteenth time of reading through Proverbs 31, and trying to assimilate the wisdom taught there, that He opened my eyes to see who my servants were: crock pot, bread machine, washer, oven, sink, refrigerator, sewing machine, and many, many, more. And then to get them going early in the morning after He has given me the Living Bread to meditate on all day long.

I am still striving to be all that He wants me to be. I have not arrived. I still struggle. But as I see Him afresh and anew every morning, I see He has the power to do anything with anyone who is willing to let go and let him have total control. It took me three readings of His Word to do that. Now I am His Servant, His Slave, His Daughter, and part of His Glorious Bride! I ask Him to orchestrate my moments into a life of praise to Him. May He shine, may He shine, may He shine! And may His Servant, Laine, be forgotten and may Jesus Christ be the fragrance remembered. I am His Fingerprint, wanting, oh so wanting, to leave His Impression.

With much love to you all,
Laine