Do You Avoid False Teachers at ALL Costs? 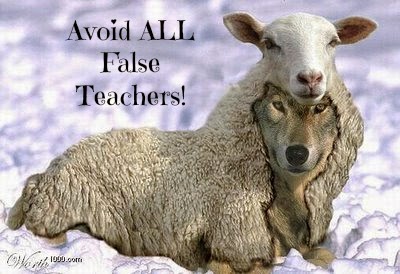 Jesus was VERY adamant with His disciples about being aware of the false teachings of the religious leaders of that day, "Take heed and beware of the leaven of the Pharisees and of the Sadducees" {Matthew 16:6}. Paul admonishes us in I Timothy 4:7, "But refuse profane and old wives' fables and exercise thyself rather unto godliness." Then in Colossians 2:8, "Beware lest any man spoil you through philosophy and vain deceit, after the tradition of men, after the rudiments of the world, and not after Christ."

God is VERY clear that we are not to listen to false teachers, EVER. Yet, many parents are handing their precious children over to government schools every day for eight hours a day to hear some false teachings and into an institution which is mandated to be anti-God. They have completely manipulated history to take God out and fit their agenda of a society that is opposed to everything godly. In California, they are teaching kindergarteners about alternate families, thus making the ideal of a mother, father and children seem antiquated.

I don't care how much you ground your children in the Word of God, God commands even us adults who are grounded in the Word of God to avoid false teachers, let alone our vulnerable children. We are losing the next generation to the prince of the power of the air because too many Christian parents aren't willing to take the command seriously to train up their children in the nurture and the admonition of the Lord but are instead doing just what everyone else is doing and what society deems acceptable and good.

Just because it is "free" doesn't really mean it is free. The cost of allowing false teachers to teach your children is WAY too costly. I think a huge part of my children never rebelling from the Lord and walking with Him as adults was the fact that they didn't sit in front of false teachers. Yes, they were in the public school until fifth grade but the public schools back then aren't like they are today. However, if I knew what I know today, I probably would not have sent them to public schools.

I homeschooled them through junior high, then they went to a solidly biblically based high school. After that, they went to BIOLA {Bible institute of Los Angeles} where all the students have to minor in Bible. My children learned Bible from the time they were young until they graduated college. {Alyssa went to dance with a Christian Ballet Company that spreads the Gospel all over the world through dance.}

We can't expect to disobey the Word of God and produce godly offspring. Women, time is short. The enemy of our souls is on the prowl for our children. DON'T let him have them! Make sure your children are protected from false teachers. Let the Word of Christ dwell in them richly. Let's raise up a new generation that is wholly and completely dedicated to the Lord and His ways.

But whoever causes one of these little ones
who believe in Me to stumble, it would be better
for him to have a heavy millstone hung around his neck,
and to be drowned in the depth of the sea.
Matthew 18:6

***I was on a radio program yesterday and if you'd like to listen to it and
hear my voice and testimony, HERE it is!