Women are Still Chewing on the Forbidden Apple 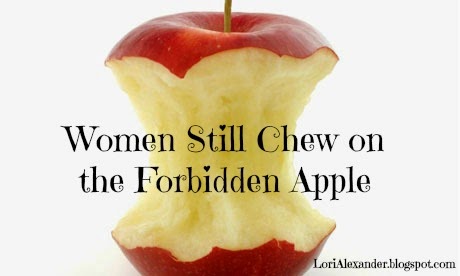 Lindsay wrote a great piece on the Fifty Shades of Grey. TheJoyFilledWife commented on this post. Many times, I get posts just from her comments! She has such a heart for the Lord and for marriage. Here are her comments ~

I spent a great deal of time last night in prayer and sorrow for our nation. The fact that the pre-sell tickets for this movie have topped just about any other, shows the great depravity of our nation, as well as the sickly state of Christianity. It is said that the most tickets have been sold in the Bible Belt of the US -- obviously the majority being women -- and I sit here asking myself, "Where are the men of God that should be stepping in and telling Eve that not only may she not allow Satan to deceive her by eating the fruit, but that the 'fruit' is but a disguise for the bondage that accompanies it's consumption?"

But, alas, the women of our society are reaping what they've sown all these years through their rebellion against the protection and authority of men. At a time when we women need the strength and power of men the most, few of them are anywhere to be found. Since we have, for decades, sent the message to men loud and clear that we are capable of taking care of ourselves in every capacity and have no real need for them, we are left to fight our battles alone, aided only by our immense vulnerability to deception that will ultimately leave us -- the weaker sex -- to be held captive with no knight to come and rescue us from the pit we have willingly thrown ourselves into.

Oh Jesus, come quickly! Separate the wheat from the chaff and refine your bride so that she may shine like a light on a hill in this dark and dismal world. Sweet Savior, you are our only hope! Oh God, hear the prayers of your saints and be ever near to us, drawing us unto the shelter of your wings. The enemy roams the earth, seeking to devour and destroy, but we rest on knowing the Truth that greater is He who is in us than he who is in the world.

And Adam was not deceived,
but the woman being deceived was in the transgression.
I Timothy 2:14