Are All Men Buffoons? 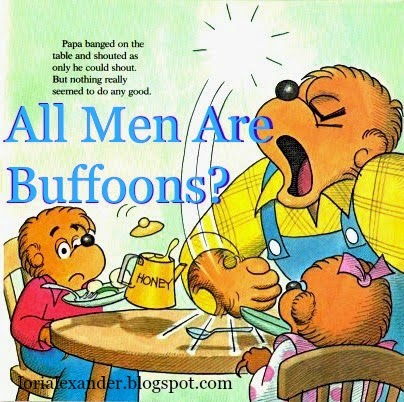 Yes, according to most cartoons and television shows. I was reading Berestain Bears to my grandchildren and noticed that Papa Bear is always doing something stupid and Mama Bear, the smart and reasonable one, fixes him and the family. I loved watching The Flintstones when I was growing up. Fred and Barney were buffoons but their wives were the smart and intelligent ones on the show.

The majority of programs when I was growing up were like these shows as they are today. No wonder, we women, think we know it all and we have to set our husbands straight. {As you can see in the above picture, all the family needed to have their manners set straight by Mama Bear, including Papa Bear. Mama Bear set up the manners and consequences, then as soon as Papa Bear blew it, he had to dust the whole house.} Think of these shows compared to Father Knows Best! Oh, how far we have fallen.

As you can see, we were all raised thinking women were better than men if you watched cartoons or television shows growing up. When we get married, we think we need to set them straight since we are smarter. Isn't it amazing that Satan can even use cartoons to set little girls up for having bad marriages? Little boys are raised to think that women are smarter, therefore, they need to allow their wives to lead the home because 'if mama ain't happy, nobody's happy.'

I remember Debi Pearl saying that right after she was married, before they even consummated their marriage, they went shopping for some hamburger meat. Michael picked out an expensive one and she told him she thought it was too expensive. He gave her a look that said something like, "And I married you to tell me what to do?" She said that after that, she never tried to run his life.

I have had many women tell me that they are more "spiritual" than their husbands. They read their Bibles more and go to more Bible studies so in their minds, they are more spiritual. However, who acts more like Jesus? Which spouse is uncritical, loving, generous, and more accepting of others? The fruit of one's life says a lot more about who is more "spiritual" than time spent reading the Word and going to Bible studies. {Although I think it is VERY important to spend time daily in God's Word, as you know!}

We must be very careful about treating our husbands without respect as if we are better than them. Just our critical, manipulating, and especially our prideful thoughts of thinking we are better than them shows us we are definitely NOT! It's so much easier to see other's faults instead of our own. I think it's much safer to not say or think you are better than your husband in anything and simply love, respect, submit to and obey him instead. Let God work out all the kinks.

For through the grace given to me I say to everyone
among you not to think more highly of himself
than he ought to think;
but to think so as to have sound judgment,
as God has allotted to each a measure of faith.
Romans 12:3