How to Help a Husband Who is Overweight 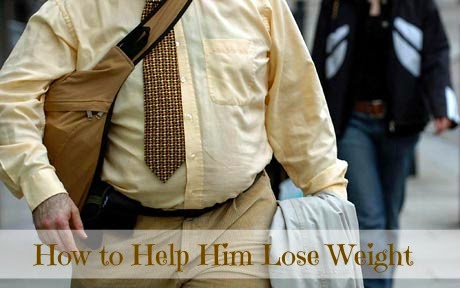 Can a wife confront or help a husband who is overweight and/or has health problems? Thejoyfilledwife had a great response on Should Weight Be Off Limits in Marriage? ~

Yes, absolutely I think it's appropriate to bring weight concerns to our husbands. However, the approach to it needs to be very respectful and will differ depending on how your relationship is. If your relationship has tension due to disrespect or nagging, he probably will not be very receptive to you. If, however, your relationship is great and you have great communication between the two of you, it will be much easier, provided it's not a super sensitive subject for him.

In my experience, men receive our words best when there are fewer of them and they are spoken very respectfully. In my opinion, however, and the men I have asked about this subject recently, I think that confronting with concern should be a second approach and not the first. So what is my recommendation for a first approach?

Wives actually have significant influence over the eating habits of their family. Every man I have asked about this subject has confirmed that their food choices have more to do with convenience than anything else {although, of course, they won't be eager to eat foods that they don't like the taste of}. That means that if a wife is purchasing and preparing great-tasting healthy foods that are always ready for consumption and don't take time to prepare, their husbands and children will almost certainly eat those things. If you pack your husband healthy (and tasty) lunches and snacks to bring to work, that will probably prevent him from buying junk food out of convenience. You will want to pay close attention to what he doesn't eat from his lunch, however, so you can swap those foods out for other healthy foods he will eat. Otherwise, he will likely go out and buy a quick substitute for whatever he doesn't eat. Men also like it when you include a small treat in his lunch so he doesn't feel overly restricted.

When your husband is at home, have meals prepared for him before he gets to the point of being super hungry. I think portion control is a huge part of maintaining proper weight. Smaller meals consumed more frequently is much better for your system than huge amounts consumed less often. Most men eat until they are overstuffed because they don't want to have to make food again in the near future and they want the full feeling to last as long as possible. You can solve this problem by having smaller-sized healthy and satisfying meals brought to him more frequently and provide healthy snacks in-between. I find that setting healthy snacks on the counter or where they frequently spend the most time is the best approach. I like to set out raw almonds, veggies and dip, fruit pieces, whole grain crackers and hummus, etc. on the counter so they can be grabbed instantly. Unless your husband has his mind fixated on something specific, he will almost surely grab whatever is close and prepared.

When it comes to drinks {for instance, soda}, I find that men consume soda
for one or more of the following reasons ~

1. Temperature: Most men love ice cold drinks. They want to feel refreshed when they consume a beverage. Most men would rather pay 5 times more for an ice cold Coke at the gas station than buy a warm 12-pack of soda from the grocery store that they have to wait to get cold. Even when it comes to water, most men would be much more inclined to drink water if it was icy cold and readily available, rather than having a room-temperature bottle packed in a lunch sack.

2. Carbonation: For many men, carbonation is a big part of why they go for a soda. There's something refreshing about carbonation and it also helps make them feel fuller. Ice cold, fresh sparkling water by itself or with added fruit juice can be a great substitute. Buy it, get it super cold, serve it over ice, and set it down next to him and tell him that you bought a new drink for him to try and see if he likes. No pressure and no worry if he doesn't. Taking the pressure off him will probably help him be more open to considering it. The trick here is that you have made it attractive {with ice and being chilled} and readily available by setting it next to him. Most men would have to think it looks disgusting in order to not drink something right in front of them.

3. Taste: Perhaps he just absolutely loves the taste of his particular soda. In that case, I find that it's usually a lost cause to try and find something similar in taste that's healthier. When people prefer a specific taste, they are usually turned off my similar but not identical substitutes. The best way to have them consider switching to something healthier is to provide something similar in presentation {sweet, carbonated, cold, etc.} but with a totally different flavor. For instance, a relative of mine used to be completely addicted to Coca Cola. They loved the flavor and composition of it and totally rejected anything tasting similar but not identical. They moved on to healthier choices because they found something similar in composition but with a totally different type of flavor that they loved. In this instance, it was a carbonated fruity beverage that did the trick and broke the addiction.

4. Habit: If your husband drinks soda or other unhealthy drinks out of habit, gradually trying the recommendations above may help.

Pray for your husband in this area, do your part to set him up for success, lead by example, and be his supporter and give him affirmation when he takes steps in the right direction. Hope that helps, sister!

And the LORD God said,
It is not good that the man should be alone;
I will make him an help meet for him.
Genesis 2:18