Children Need a Bible and a Belt 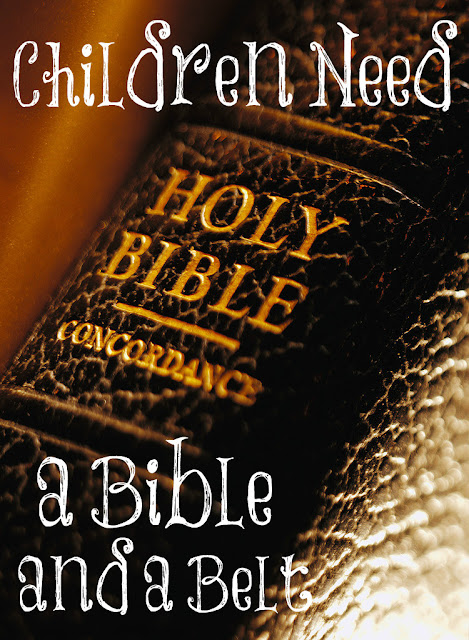 Have you noticed that the more politically correct this culture gets, the worse off it gets for everybody? Many believe that we need to get rid of guns since they are the cause of so many violent deaths. No, guns aren't the cause of all the violent deaths we are seeing today with people going into classrooms and murdering children. People have owned guns in America since it began over 200 years ago and nothing like this has been seen until the past ten years.

Joey and Rory sang a song called A Bible and a Belt. We raised our children with a Bible and a belt. We believed in teaching them God's Word from the time they were little. We also believed in the rod that the Bible exhorts parents to use. He who withholds his rod hates his son; But he who loves him disciplines him diligently {Proverbs 13:24}.

They were both made of leather
Both black and frayed and worn
And I was brought up to respect them
Since the day that I was born
One came here from England
And it's been handed down for years
The other one was ordered from
A catalog at Sears
One my mama read to me
Till I was well into my teens
And I thought all the other one was for
Was to hold up daddy’s jeans
Till I told a lie and learned
It had another purpose too
And out behind the shed, my daddy said
This'll hurt me more than you

I remember when I was twelve
I stole a dime store comic book
And how mama read where the scripture said
To take back what I took
When I refused my daddy grabbed
My arm and said “come on”
I needed more, he knew than just Matthew,
Mark, Luke and John
Sometimes it made me cry
Sometimes it made me fightin' mad
And I wish I'd been raised without them
Like some other children had
But now I’m grown with kids of my own
And I know just how they felt
You know it seems to me what the world still needs
Is a bible and a belt

‘Cause one had my daddy’s name on it
The other said King James
With love they taught us lessons
But we feared them both the same
One led us to heaven
And the other hurt like hell
But those were the days when kids were raised
With a bible and a belt
A bible and a belt.

For further guidance on raising children to be obedient and trained in the ways of the Lord, I highly recommend the Pearl's book To Train Up a Child. If you've read my posts for very long, you know I have no desire to be politically correct. My only desire is to be biblically correct in everything.

Let the word of Christ dwell in you richly in all wisdom.
Colossians 3:16

***There is a prayer vigil for Joey tonight at 5:00 CT.  "But please, one thing I ask, don't pray that Joey is healed. Yes, pray for a miracle, but also pray for peace in her heart, and ours, if God chooses not to let this cup pass from her sweet lips. His will, not ours." {From her husband Rory}