She's Afraid to Give Up Control 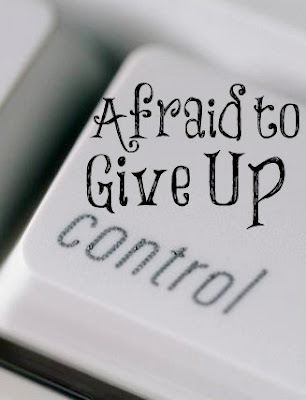 This woman we know has a difficult marriage. It is difficult mainly because she is very controlling and insists on being right, just as many of us do. They have been married many years and her husband is fed up. He left her. He’s left her several times when he can’t take it anymore. She was devastated and came to speak to Ken and me.

Ken counseled her a long time. She reads my blog every day and loves what I write but she just can’t seem to give up her control and insisting on being right. She wants to so badly. She wants more than anything to be a godly, submissive wife to her husband. She loves her husband very much. He is a good husband to her. He is faithful, loves her and is a good provider. He works very hard but she claims to “forget” all that she has learned when she gets into the heat of the moment with her husband.

Her husband also talked to Ken for a long time. He encouraged him to take control and not let her get away with her controlling ways. He told her that she needs help in becoming the wife she wants to become. Separating is not the answer and is not beneficial to the marriage although every time it happens, it makes her miserable and feeling terrible about her behavior.

He was finally convinced that he needed to take control. He told her that he was ready to get back together but that things would be different. She’s scared. She knows it’s the right thing to do but she’s scared of giving up control. They are both going to be going against their natural tendencies {He doesn’t like to confront and control and she does} yet they both know it is badly needed in order to make their marriage a strong and happy one. They are both willing to work on it.

This isn’t the only marriage like this. Ken has mentored other men in similar situations. The men who follow his advice are making improvements in their marriage. Men aren’t taught how to be the leaders in their homes just as wives aren’t taught to be submissive to their husbands. The most important thing they need to do is to learn to walk in the Spirit and do what the Lord has commanded them to do and not in the flesh; what comes easy and natural for them.

Many women have the desire to be godly wives to their husbands but they don't have the self-control to do it. This is where the husbands need to come in and help them. Ken and I keep each other accountable for any sin in our lives. We want to walk in the Spirit and live lives that are pleasing to the Lord. This is the way a godly marriage should work!