Problems with Babies Getting Used to Mommy at Home 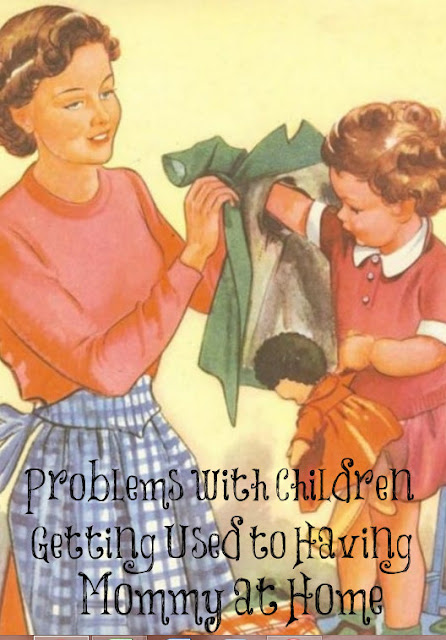 The problem with children getting used to having mommy at home is they will no longer want to go to preschool. They will enjoy being with her and will be discontent being without her. Yes, this was one mother's sentiment! She didn't want to take off too much time from work being home with her baby since she was afraid her baby would want to be home with her more than in the preschool. Can you believe the thought pattern of many of today's so called "enlightened" women? It seems to me the more enlightened they become, the more foolish they become.

I also just heard another mother regretting her decision to forgo law school for a much lower and less prestigious job say, "My children would probably be much happier with me if I had become a high-powered lawyer than a secretary." Their thinking is so far removed from reality that it is pathetic!

There aren't ANY children who wished their mother worked all day, put them into a preschool and rarely saw them. There aren't any children that care about whether or not their mother is a lawyer or secretary. There aren't any children that would prefer stuff over having their mom home full-time caring and nurturing them. All children want their mother! They want to be with her, cared by her, trained by her and yes, even disciplined by her. Boundaries and discipline are protection in a child's life and they will thank you for it when they get older. This is the job God gave mothers when they bear children; to be with them! There is NO such thing as only quality time with children; they need quality and quantity time with their mothers.

A mother knows her child better than anyone else. She loves her child more than anyone else. If something tragic happened to her child, she would be the one who was distraught and will suffer from the ache and loss inside of her for many, many years. She will grieve and have guilt over the lost time she should have had with her child. Her child needs her. Her job does NOT! No one can replace your job as a mother. Anyone can replace your position in any job you may have. Little children don't even know what lawyers and secretaries are but they know when they are being loved and cared for full-time by their mothers. Like Dr. Laura repeated often, "If you're going to have a child, you be the one to raise it."

God made mothers emotional and sensitive for being home with their children. Their nature is perfect for raising children. They are also the "weaker sex" and fare better at home if they have had a rough night with their child or up nursing a baby often during the night. They are also more protected at home. They were created to live most of their lives in their home caring for the precious children the Lord has blessed them with.

He makes the barren woman abide in the house
As a joyful mother of children. Praise the LORD!
Psalm 113:9
picture source