Can Wives Contribute to Their Husband's Affair? 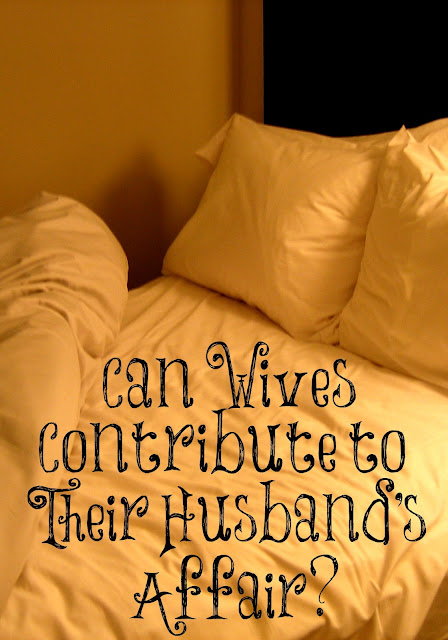 {Written by Ken and me}

Many scream "Foul" if anyone accuses a wife of having anything whatsoever to do if her husband has an affair. I agree that any man or wife who cheats on their spouse is the one who is ultimately accountable for their sin, yet let's take a close look at what God's Word says about this subject. If Christians are called to NOT cause another believer to stumble {Romans 14:21}, certainly a spouse can do much to help prevent an affair, even if it is not their fault if a spouse chooses to break their covenant vows.

We know Paul commands husbands and wives to not deprive each other except for a time of prayer and fasting. However, the verse that exhorts couples about this subject ends with, "come together again so that Satan will not tempt you because of your lack of self-control" {1 Corinthians 7:5}. Therefore, the reason we must NOT deprive our spouse is to protect them from being tempted by Satan since the Lord knows it is too easy for the spouse that is being deprived to go looking elsewhere because of their lack of self-control.

Therefore, don't deprive your spouse to help protect your marriage. We are commanded to NOT deprive them!!!  If we deprive them, we are not doing our part to protect our spouse. Love says that we must do our part to help our spouse stay faithful, and when one regularly deprives their spouse, it can easily become the wedge that drives them to seek sex outside the marriage bed. Two wrongs never make a right, but you will be held accountable for your depriving your spouse, even if you are not held accountable for his or her affair.  Depriving your spouse sexually is a sin.

Women have told me {Lori} that married men should be able to have extended times of celibacy and be fine with no sex since godly single men like Paul lived without ever having sex and did not have affairs. There are so many things wrong with this statement including the fact that a Christian wife is NOT the one who should be determining the frequency of sex in the marriage. There is a BIG difference between a single, godly man who does not have to live just feet from an attractive woman that he is not to able to touch or have intimacy with and a married man. More so, a husband by marital contract and promised vows is living in anticipation of having regular sex, unlike a single man who has not been willing to be married to a wife and meet her needs. It takes an extra large dose of self-control for any married man who is being sexually deprived from his wife compared to a single man, especially when anger sets in over the unwarranted and often unkind situation.

Godly, single men who want to walk in purity and godliness have the opportunity to make a covenant with their eyes not to look lustfully at a young woman {Job 31:1}. However,  if they cannot contain, let them marry: for it is better to marry than to burn {1 Corinthians 7:9}. The main reason most men and women marry is because they are burning with the need for sexual expression. Neither husbands nor wives should be causing the other to burn any longer by depriving them.

What many wives do not realize, although affairs can happen for many reasons including stupidity, most men long for a close relationship with their wife, and to a man, sexual expression is a key part of that. Men want to bond sexually and have a wife not just lay there, but to actively participate in sexual enjoyment, together as one; sex is not the end point of their sexual need, but a part of creating the closeness they desire with the one which they chose to live out their life with. Sex as a duty is important, but even that is not enough to affair-proof a marriage; if one is not seeking the ultimate purpose of sex to create life-long, connected commitment and closeness to each other.

In conclusion, women and men, DON'T deprive your spouse!!! God commands that you  protect your spouse from Satan's temptations. No one but the Lord can ultimately judge if an offended spouse is partially responsible for an affair, but God's Word sure makes it sound like they may well indeed be partially culpable if they are depriving a spouse of sex; even if each one is responsible for their own sins. God gave marriage precisely for sexual needs to be fulfilled in the marriage bed, including the close connections created by sexual enjoyment together. Only the offended spouse and God can ultimately know what happens in a home that may help a spouse excuse their inexcusable behaviors in an affair, but it seems that according to God's Word, not depriving your spouse can have a great impact on keeping a spouse from burning, and getting burned.

***If your husband feels deprived due to illness, injury, childbirth, etc., please understand that these circumstances may be rare exceptions to what we are trying to convey through this post.