When Your Husband Irritates You 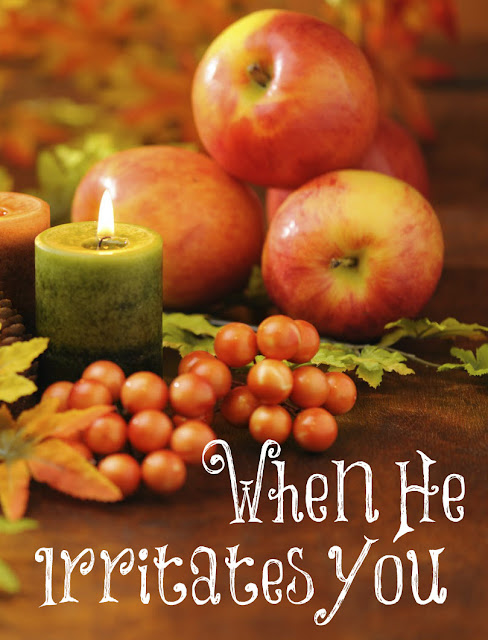 All husbands will irritate their wives at times. Some chew with their mouths open. Some watch too much television. Some are messy and never pick up their clothes. Some never tell their wives how wonderful they are or how much they appreciate them. Some are often late for dinner and forget to call. How are we to handle these irritations? Should we get angry about them.

No, for anger does not achieve the righteousness of God {James 1:20}. So what are we supposed to do? I'm sure most women have already spoken to their husbands about the things that irritate them but either the husbands don't agree, don't want to change or forget. Now what? Learn to accept it. How? Every time they are doing something that irritates you, think of something you love and appreciate about them instead and learn to be thankful.

They chew with their mouths open. Thank the Lord that they work so hard to provide your family with food! They watch too much television. Thank the Lord you have a comfortable home for them to watch television in and that they are able to get some much needed relaxation. They don't appreciate you like they should. Begin telling them all the things you appreciate about them. Treat them the way you want them to treat you instead of expecting them to treat you a certain way. Model this behavior to them and they just may catch on! They are late to dinner. Thank the Lord they have a job to go to everyday to bring a paycheck home to pay the bills. Be transformed by renewing your mind with Truth and thankfulness, instead of irritation and anger.

We are to win our husbands without a word. This means we don't scold them, yell at them, boss them around, treat them like a child or get angry with them. We work on our own behavior in becoming more like Christ who lives within us and allow the Lord to work on our husbands. We learn to win the battle in our mind and quickly change negative and critical thoughts to good and pure ones. We speak uplifting and encouraging words instead of degrading and discouraging words.

If you're having difficult relatives over for Thanksgiving, practice the same with them. There's good qualities in everyone. Seek them out and dwell on them. Make sure you do everything tomorrow to have a peaceful, thankful holiday!

And let the peace of Christ rule in your hearts,
to which indeed you were called in one body. And be thankful.
Colossians 3:15