What about the "Apostle" Junia and "Female" Preachers? 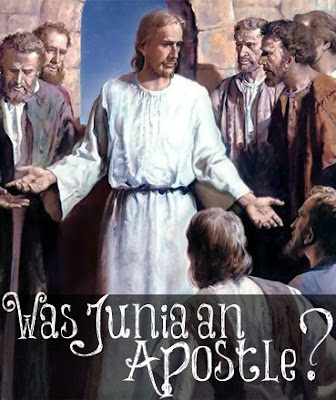 Last week's post Men Make Better Pastors caused quite a stir among women. They used four different verses in Scripture to try to prove to me that God approves of female preachers having authority over men in the church. I am going to go through all four and show you how wrong these arguments are so when others use these verses to try and convince you of female preachers, you will have a good defense to these perversions of Scripture in justifying female preachers.

Many use Junia in Romans 16:7 to claim Junia was an Apostle, therefore she must have had authority over men; "Salute Andronicus and Junia, my kinsmen, and my fellow prisoners, who are of note among the apostles, who also were in Christ before me" {Romans 16:7} Paul states "my kinsmen" right after using this name, so we can be sure it was a male since he wouldn't call a female "my kinsmen." Secondly, just because he wrote Junia was "of note among the apostles" doesn't necessarily mean that Junia was even an Apostle; just that the Apostles took note of him and he was special to them. If Junia was an Apostle, God's authority structure throughout the Bible was given to men, except in a few rare instances.

Another verse many use to say that there were female deacons in the church concerns Phoebe. "I commend unto you Phoebe our sister, which is a servant of the church which is at Cenchrea" {Romans 16:1}. All of the translations call her a "servant of the church" except for the NIV and the New Living Translation which call her a 'deacon.' These are the more recent transliterations of the Bible. There is NO way she can be a deacon since Paul made it very clear that deacons were to be the husband of one wife. After giving all of the qualifications of a deacon in 1 Timothy 3, Paul wrote, "Even so must their wives be grave, not slanderers, sober, faithful in all things. Let the deacons be the husbands of one wife, ruling their children and their own houses well" {1 Timothy 3:11, 12}. However, women have always served at churches in some capacity that didn't include being in authority over men.

Others will use this verse to argue that women can be preachers thus having authority over men. And it shall come to pass in the last days, says God, I will pour out of my Spirit upon all flesh: and your sons and your daughters shall prophesy, and your young men shall see visions, and your old men shall dream dreams {Acts 2:17}. Every single person who believes in Jesus with saving faith receives the Holy Spirit, including sons and daughters. He is the Comforter that Jesus told His disciples they would receive after His resurrection. This verse does NOT prove that there can be female preachers or elders in authority over men in the church!

The final argument I was given for female preachers was when the women found the empty tomb and were told to go share the news that Jesus had risen. They went to the disciples and "preached the Good News" according to those who want to use this verse to support female preachers. And go quickly, and tell his disciples that he is risen from the dead; and, behold, he goes before you into Galilee; there shall ye see him: lo, I have told you. And they departed quickly from the sepulchre with fear and great joy; and did run to bring his disciples word {Matthew 28:7, 8}. Does this mean that the women were preachers, elders, deacons, and in authority over men because they told the disciples what they had seen? This is an extremely weak argument for women preachers, wouldn't you say?

Be very careful what teachers or preachers you learn the Bible from since many will turn away their ears from the truth, and shall be turned unto fables {2 Timothy 4:4}. All throughout God's Word, He used men as the leaders. They were the Patriarchs, Kings, the leaders of the twelve tribes of Judah, Jesus' Disciples, Elders, Deacons and Authors of the Bible {For the prophecy came not in old time by the will of man: but holy men of God spake as they were moved by the Holy Ghost. 2 Peter 1:21}. This is the authority structure God has instituted and we best be abiding by it.

He has given women the special role of being a help meet to their husbands, bearing children for Him and raising godly offspring. There are also many ministries women can do in the church that are not in leadership positions over men. Older women are called to teach younger women many good things. He also calls us to use our lives to glorify Him in whatever we do and as an offering for Him, including telling others about the Lord and sharing the Gospel.

Every single human being has purpose and is deeply loved by our Creator. Having an authority position doesn't make the one in authority better than those under their authority just as parents are not better than their children. We all have value in the Kingdom of God and should use our gifts and talents in serving others and serving Him, recognizing and appreciating the authority structure God has ordained.