When the Leader Isn't Respected 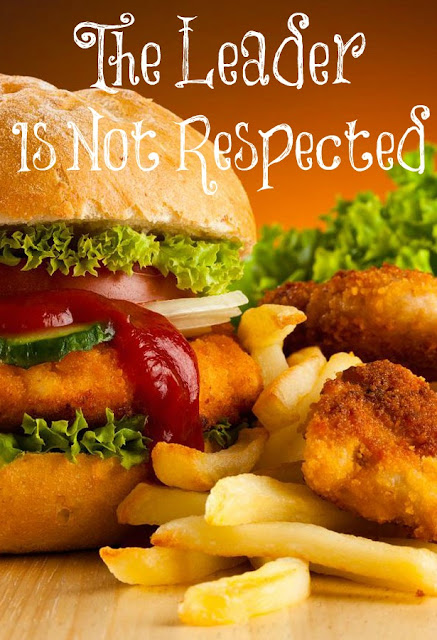 Grandma wants to feed her grandson who has Type 1 Diabetes junk food when he’s at her home since she believes his parents are way too strict and health conscious. The father wants to feed him only good and wholesome food because he has this disease. He wants him to be as healthy as possible. They fight back and forth, calling each other names and always angry at each other. The daughter of Grandma wants peace between the two. She loves and respects both her mother and husband and wants them to stop arguing about it. How does the psychologist help them?

She counsels them to think how they will act before they see each other. Ask “How…?” questions instead of attacking each other and so on. She gave several steps they needed to take anytime they are with each other. I have heard the same type of steps given to married couples in order to solve marital arguments and conflict.

My answer to the above problem: The husband is the head of his wife and family; what he says goes! Easy! There is no trying to remembering what to say, how to ask the questions, etc. There’s a leader in this home and it isn’t Grandma. See how easy the problem is solved when there is one leader and a final decision maker?

Conflict and arguing are bound to happen when there is no leader. Of course, this solution wasn’t given to this couple since they don’t believe in biblical headship of the husband and neither do a lot of Christians. Trying to do things that are contrary to God’s plan makes things SO complicated! The whole time this conversation was taking place, I knew the answer immediately and it would have been solved if I could have given it. I would have been laughed off the stage, however. They would tell me I want women to go back to the Stone Age. No, I want women to go back to the Lord’s ways; the ancient paths laid out for us many, many years ago.

A father has every right to do with his child as he sees fit and mothers-in-law should respect that right. We need to do everything we can to promote peace in families and peace always comes when there is one designated leader. I was talking to my neighbor the other day. I said to him, “Aren’t your children your greatest blessing?” He responded, “They are one of them but my wife is by far my best blessings. God threw out the mold after He made her.” His wife loves to serve her husband and make him happy. She respects him as the leader of their home. There is peace in their home. Peace comes from doing things God’s ways. They will NEVER come by trying to do them our way.

But I want you to understand that the head of every man is Christ,
the head of a wife is her husband, and the head of Christ is God.
1 Corinthians 11:3