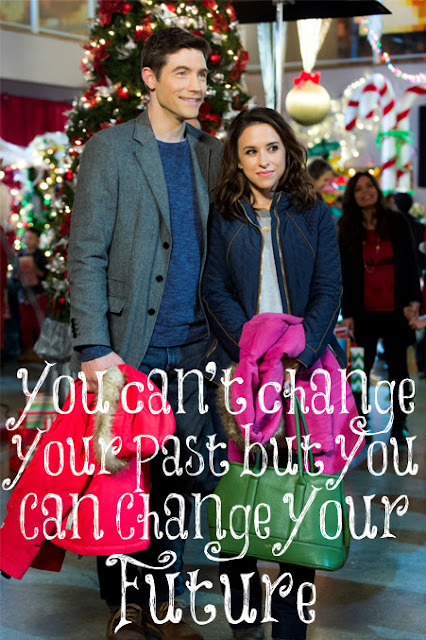 Yes, I enjoy Hallmark movies. They are decent and usually have a good story line; they always end happy! Some are too silly for me but many are not. Last week, I watched A Family for Christmas. It was about a career woman who was a successful newscaster. She lived in San Francisco in a gorgeous apartment overlooking the Bay. She received a promotion from a highly recognized news station in New York. She immediately took it with great excitement. However, before she got this job, she had a Facebook friend request come to her from an old boyfriend and it got her to thinking.

About this time, she met a guy dressed up as Santa Claus ringing the bell at the red bucket. {I'm not sure why Hallmark centers most of their Christmas movies around Santa Claus since those who watch them are mostly women!} She shared with him a bit about her life. He told her to make a Christmas wish. She went to bed that night and woke up the next morning in a house in the suburbs married to her old boyfriend with two children. She finds out she's a stay-at-home mother who deeply loves her husband {everyone told her she did any ways}. Of course, she was scared to death in this role at first and found Santa. He told her that she will stay in this situation until she "figured it out." She had no idea what this meant.

After a while, she began loving her life. She grew to love her two daughters and her husband. One night, they were all at a party and a newscaster who had previously been her secretary was sharing news on camera. Suddenly, the newscaster was hit by something falling, so this mother had to take the mic. She did a great job and was offered a prestigious job in the city which would mean her family would have to move to the city. She came home and excitedly told her husband. He unhappily replied, "I thought we were happy doing what we are doing!" He liked having his wife home full-time. She finally decided not to take the job since she loved her life the way it was so much.

The next morning, she woke up back in her bed alone in San Francisco. She frantically looked for Santa and told him that she loved that life. She wanted to go back. He told her she couldn't and she was so upset with him. Why did he take her from a life that she learned to love so much more? He responded, "You can't change your past but you can change your future." She quit her job, got a hold of her old boyfriend and it ended with them going out to coffee together arm in arm.

How many of you regret your past and your decisions? Did you put a career ahead of marriage and motherhood? Were you a disobedient wife to your husband, thus causing him misery? Did you divorce your husband and now know it was wrong? Did you have a career while putting your children in preschool to be taken care of by others? There is nothing we can do about the past but we can change the future. We can begin walking in the ways of the Lord. We can become submissive help meets to our husbands. We can work on coming home full-time and being a keeper at home. We can become the mother our children need. It's not too late. With God all things are possible. Therefore, stop regretting your past and start right now to obey the Lord's will for you in every area of your life.