Did Adam Sin Before He Ate the Apple? 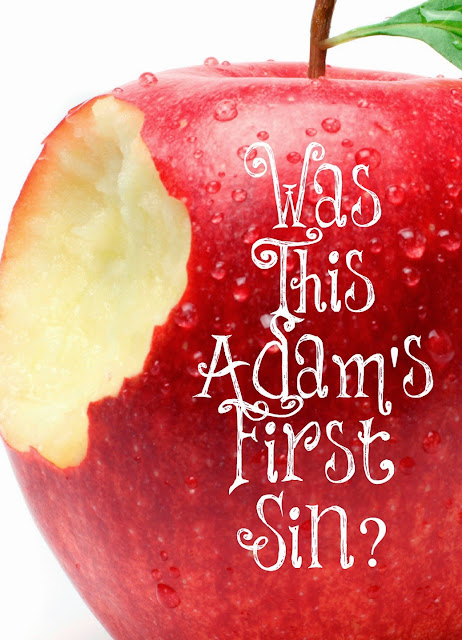 I have never really thought of it before, but perhaps Adam’s first sin was not eating the fruit that Eve gave to him. According to God’s Word, Adam’s first sin was “because you have listened to the voice of your wife, and have eaten from the tree about which I commanded you” (Gen. 3:17).  Is there actually a sin that Adam committed before the apple ever reached his lips? Was it the sin of listening to his wife over God’s Word? Certainly eating the apple was the final outcome of the sin, but what other sins preceded the actual breaking of God’s clear command not to eat of the fruit of the tree of the knowledge of good and evil?

It does make one wonder what would have happened if Adam had trusted God at His Word and turned Eve in to God without eating the forbidden fruit. “Woman, what have you done? Come here right now and let us go speak to our Father about this.”  “God, this woman you gave me ate of the apple that we told her not to eat, because you had forbidden us at the risk of death. What shall I do with her now?”

This would have surely been the correct response of obedience to God and His Word. To exercise leadership and discipline by turning Eve over to God, or perhaps taking matters into His own hands and dealing with her so that she would not eat the apple again. Perhaps a warning? Perhaps some form of discipline?

“Eve, I am so disappointed in you that you would go against what I specifically instructed you that God had told me. I have no idea what God is going to do with you when he arrives for our evening walk, but you go sit in our cave and wait until I tell you to come out. It is possible that God cannot even see your face anymore, but let me go beg His forgiveness on your behalf and plead for your life, that we both may be spared.”

Now that would have been leadership. Did not God call on Adam to rule over all the earth and this included leading his helper? Instead, Adam capitulates his leadership role to follow the lead of his wife. Yes, Eve leads Adam into sin.

Now fast forward two thousand years and we find Abraham, the father of a new nation to come, is once again committing the same sin of Adam as he hearkens to his wife’s voice and goes in and sleeps with Hagar, who bears a son of promise. What was Abraham’s sin? He did not trust God that His promise of the seed of the Messiah would come through Sarah. Abraham should have said, “Sarah, you are sinning by telling me to go sleep with Hagar. You know full well that God has said that my seed which will bless the earth will come through you. Stop deceiving me and trust God at His Word.”

One has to wonder why men who are leaders like Abraham, with all his great leadership qualities, would give up their leadership to go against what they know God has said  and  listen to their wives? Why do Christian husbands throughout the centuries, and now around the modern world, do exactly the same thing as they listen to their wives, even knowing what God has said. Then discovering far too frequently the turmoil that comes from the sin of abdication of leadership. Is it a desire to keep the peace with one's wife at almost any cost? Or could it be the desire for uninterrupted regular sex? Why? The apple didn't tempt him, the Devil didn't tempt him, but Adam falls for his wife's temptation.

Think about this with me as I am processing it myself. Why is it that I spent the first seven years of marriage wanting to lead my wife and marriage, but regularly capitulating to my wife's seeming "needs" or wiser counsel? I can say that I wanted to keep the peace; that I felt as a Christian husband I was to love my wife, and that meant doing my best to keep the marriage happy. But now I wonder how much of my unwillingness to stand up to my wife when she was difficult came from a desire to try to keep harmony between us. How much was a failed attempt at intimacy done her ways. Intimacy and sex are powerful drugs for men, and with it we are happy, and without it we are very unhappy. We would do almost anything for a wife, including giving up our God given responsibility to lead her, to insure that our flow of harmony and intimacy remains uninterrupted. We truly do not want to be alone.

Tell me ladies, you already know this don’t you?  Here I am in my 35th year of marriage and I am just now realizing how much I was willing to give up just to try to connect with the lovely creature of a wife. For me, and many other Christian men, sex is only the consummation of what we really long for in our marriages. To know fully, and be completely known, by our wives. This is what we long for, a full and complete intimacy where hearts, minds, souls and bodies all are united as oneflesh with our spouse. Praise the Lord that we are experiencing this now for the last ten years as we hearken to the voice of our God instead of the lies of this world.

I wonder if Adam did not find himself in exactly the same predicament. Here he had beside him Eve, a most marvelous creature just like him, yet a perfect counterpart with a gorgeous smile, soft curves and a warmth that could drive the father of all mankind wild just thinking about it.  I wonder if he was thinking,

“What would I do without my Eve?! Who would I talk with and lie down to her warmth and comfort at night? Who would make my heart and mind explode each time I see her beautiful body and feel her womanly caresses? She has sinned, and now I must choose between my adorable wife or God's command.”

There is little doubt that Adam’s choice to eat the forbidden fruit was a willful act. The scriptures say he was not deceived, although some speculate that he may not have known the apple he was given came from the forbidden tree. God’s Word is clear that it is through Adam that sin enters the world, not through Eve. Adam was the representative head of mankind, not Eve. Adam was responsible to lead Eve and he failed, and paid the ultimate price. We have no way of knowing what the world might look like today if Adam had listened to God over his wife. But we do know that it was a grievous sin for him not to trust God at His Word. Why they did not trust God may be directly related to a desire for peace, sex, or intimacy, which has implications for today’s Christian marriages.

Wives, if you are withholding peace or sex from your husband as a manipulation tool to be able to control him so as to tempt him to abdicate his role as leader in your marriage, then be careful to look at the results of the past. Both Adam and Abraham may be perfect examples of what the power of peace, intimacy and sex has over a man. If those examples are not enough, let us turn to Sampson and King David, King Solomon, and others, who all found themselves worshiping intimacy with a woman over obedience to their God. It is almost every man’s battle which makes it incumbent upon a wife to be a true helper to her man in this area, and give to him what God says is good and healthy within marriage; to allow him by your obedience to God's Word to grab a hold of his leadership role and become all that God intends him to be.

Christian men, we have to begin to see the biblical patterns shown by our fathers of old that got them into trouble. No matter how much we desire peace, and the intimacy of knowing and being fully known by our wives, we must lead to truly achieve all that God wants for our lives and marriages. Our wives are not to be blamed, like Adam blamed Eve, for handing us a second best, or easy option, so we might abdicate our leadership.  God's word to Adam makes it clear that we are not to listen to our wives' voices or actions if they are usurping our God given responsibilities. Did God not say, "The husband is head of his wife and wives should submit in everything to their husbands?" Let's stop being embarrassed about this God given leadership to a flawed man like you and me, and instead learn to stand up for right and wrong in our homes.

In our marriage, we found a surprising thing, that when I started calling Lori out in gentle, but specific ways, for the areas where she was being difficult and unsubmissive, God worked to open up her eyes to her God given responsibilities. Now Lori and I are finding the marriage we both have longed for, a full and complete intimacy; no secrets, no unmet longings and desires, for we know each other fully, and all is fully known and accepted in love. We are becoming one, just as Jesus and the Father are one. This is the secret to a truly biblical marriage to simply hearken to God's Word.

Be careful not to allow the Serpent of Old to rob your marriage of this intimacy that is given to you by God's design. But it only comes to those who will stop eating the forbidden fruit of the lies of this modern age of individualism in marriage. To be truly free means to walk within God’s user’s manual of truth, as it is the Truth that sets us free to live exactly as God has created us to be; one with Him and one with each other.

And Adam said, This [is] now bone of my bones, and flesh of my flesh: she shall be called Woman, because she was taken out of Man. Therefore shall a man leave his father and his mother, and shall cleave unto his wife: and they shall be one flesh. And they were both naked, the man and his wife, and were not ashamed.
Genesis 2:23-25