Living Without the Two Income/Daycare Frenzy 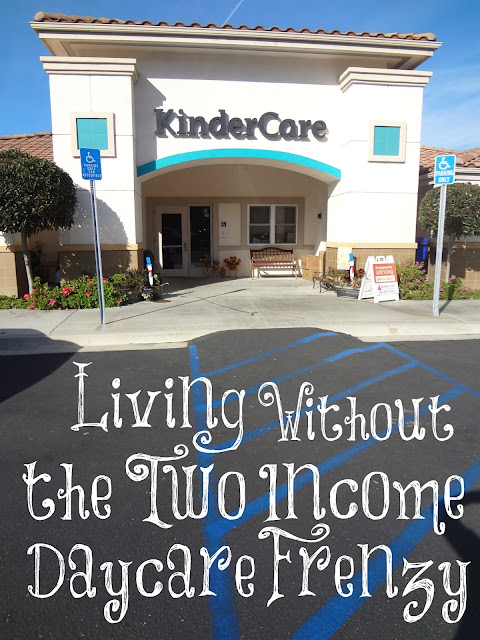 His wife was very intelligent and was pursuing a career until she got married. Then she just wanted to be a stay-at-home wife and mom. They lived in a part of town called the "ghetto" since it is the cheaper area of town. It is the place people live as their first home while saving money to get a bigger home or empty nesters who decide to downsize. The homes up the road from them are enormous and expensive; they take two incomes to afford. There are "plenty of nannies and babysitters" in these homes. His wife has felt out of place and judged by others but her husband loves that she wants to be home with his children.

Most young couples are told that if they want to afford a home, they must both work. Amy Dacyczyn didn't believe this. She wanted a large family with a large home but wanted to be home full-time with her family. "Before the fever gripped me, I had a very normal and healthy love for spending. The change occurred when I got married and began to pursue my dream. I had always wanted a large family and a rural pre-1900 New England farmhouse {with attached barn}. I had a crazy notion that I could have both without the two-income/daycare frenzy that has become the norm for the modern American family." She had heard the lies that a family needed two incomes or they could not afford a home or having more than two children. She didn't believe the lies and went out to prove that they were false. "Saving money, rather than earning money, became the means to my goal."

"In 1989, we realized our dream. Our family {then it was four children; now, with the advent of twins two years later, it's six} moved into our rural pre-1900 New England farmhouse {with attached barn}."  Their average income was less than $30,000 per year.  They saved $49,000 in less than seven years, made large purchases like cars and such for a total of $38,000 and were completely debt free!

Did they have to sacrifice a lot of pleasures to be able to do this? Yes, but it is SO worth it to be able to be home with your children and have lots of them. Now unto him that is able to do exceeding abundantly above all that we ask or think, according to the power that works in us, Unto him be glory in the church by Christ Jesus throughout all ages, world without end {Ephesians 3:21}. Since God wants mothers home with their children, He will provide a way for them to do this for He tells us that His commands are not burdensome. If He is the God who owns the cattle on a thousand hills and everything else, He can provide for you to be home. {Although it may not be a large New England farmhouse with an attached barn, depending on which area in the country you live in.}

It will take a lot of work and sacrifice on your part but will be well worth the effort. You can even make a game out of it like the Dacyczyn's did. They knew what their goals were and worked hard to attain them. You can too! {You may think some of the ways they used to save money were a bit too extreme but they certainly accomplished their goals!} You don't want nannies and babysitters raising your children while you're stuck in the two income/daycare frenzy since the Lord has given you the job of raising your children and being home with them. Begin listening to the Lord and what He wants for you instead of the lies of our culture.

I have a copy of The Tightwad Gazette by Amy Dacyczyn that I am going to give away to one of you. All you need to do is to leave a comment about one way you save money. I will announce the winner on next Friday's post!

But godliness with contentment is great gain...
If we have food and covering, with these we shall be content.
1 Timothy 6:6, 8