What is Our Natural Function? 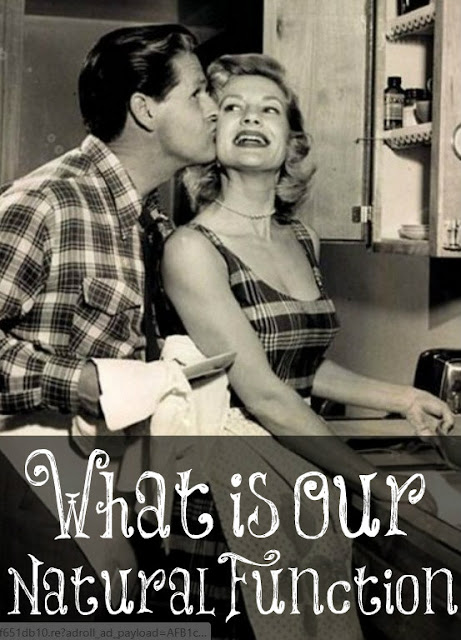 What is a man and woman's natural function? What did God create for our bodies to do naturally? The book of Romans is the most powerful theology of history in the Bible. Paul begins the book by explaining how when men and women turn away from God's Truth, they become perverse and God eventually gives them over to a reprobate mind. In Romans 1:26, 27 Paul wrote, For this cause God gave them up unto vile affections: for even their women did change the natural use into that which is against nature: And likewise also the men, leaving the natural use of the woman, burned in their lust one toward another; men with men working that which is unseemly, and receiving in themselves that recompense of their error which was meet.

Mary Pride in her book The Way Home wrote, "What is their natural function? Since the word for female is connected so strongly with the idea of nursing babies, whereas it has no connection at all with the idea of sexual activity, I believe that God is saying here that when women exchange their natural function of child-bearing and motherliness for that which is 'against nature' {that is, trying to behave sexually like a man}, the men tend to abandon the natural sexual use of the women and turn to homosexuality."

Paul said that women left their natural use "into which is against nature." As I was pondering all of this, I was asking the question, "What is the natural function of the woman?" I disagree with part of what Mary wrote since I believe our natural function, the way God created us, is to have sex with a man and have his babies, then nurse them.  For the men, Paul said they "left the natural use of the woman and burned in their lust for one another, doing things which are unseemly." The natural function of a man is to have sex with a woman. The parts fit. This is what sex actually is! Two women can't actually even have sex. They can fool around but it is impossible for them to have sexual intercourse because they don't have the parts that fit together and neither do two men. {All medical studies have proven that anal sex is "very damaging to your health and quite possibly life threatening."} When birth control entered America and women began preventing having babies {one of the main reasons God created sex}, they began having sex only for pleasure, thus using their bodies unnaturally.

Since, the natural function of a woman is to have sex with a man, have his babies and nurse them, you can see now that as women stopped using their bodies the way God intended them to be used, destruction began. They no longer needed a man. Since a man's natural function of having sex with a woman so she can bear children is taken away, he uses sex simply for pleasure. He is no longer needed to leave his mother and father, cleave to a wife and create a family.

NOTHING good happens when mankind leaves the path that God created them to walk in. God's purpose from the beginning was to create a family for Himself.  For ye are the temple of the living God; as God hath said, I will dwell in them, and walk in them; and I will be their God, and they shall be my people {2 Corinthians 6:16}. God created sex to build a family for Him; for a man to leave his family, cleave to his wife and create godly offspring. The wife was to be at home being a help meet to her husband, bearing children and keeping house.

If you have a chance, watch this short YouTube called Homemaker or Career Woman? It clearly explains women's biblical roles. "God never intended for women to pursue careers at the expense of motherhood. God intended for women to be keepers at home. Modern apostate society treats women just like men and as a consequence, women now act like men."

Let's stop acting like men and begin using our bodies for their natural function the way God intended for us to use them and not society's perversion. Enjoy being a woman. Enjoy sex with your husband. Cherish the children the Lord blesses you with. Love being at home and making a sanctuary where your family can learn about the Lord, eat nourishing food and enjoy peace with one another. This is God's will for you.